GM To Offer Android, Apple Systems In Many 2016 Models

By the end of the year, nearly every major automaker will begin offering Apple's CarPlay or Google's Android Auto, two systems that effectively turn a car's dashboard screen into a smartphone. 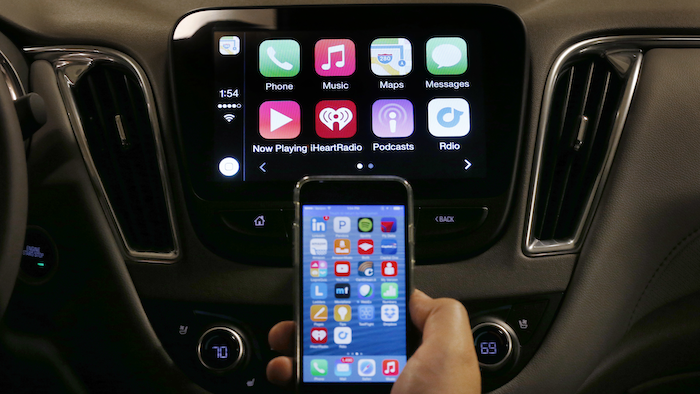 DETROIT (AP) - By the end of the year, nearly every major automaker will begin offering Apple's CarPlay or Google's Android Auto, two systems that effectively turn a car's dashboard screen into a smartphone.

General Motors made the biggest move so far Wednesday, announcing that both systems will be available in seven 2016 Chevrolet models starting in the summer. The Apple system will appear in seven additional Chevy models. Earlier in the week, Hyundai announced the Android system in the Sonata midsize car.

Experts say the move to systems devised in Silicon Valley is an admission by the automakers that people favor the way their smartphones work over the automakers' own touch screens and voice commands, which have been prone to glitches. The in-house systems have cost the car companies millions and dinged their quality ratings.

People are familiar with smartphones and have music libraries, podcasts, social media contacts and other personal items on them, said Tim Bajarin, president of Creative Strategies, a technology research firm in San Jose, California. Automakers, he said, have realized that most drivers can't be bothered learning a whole new car-based system.

"We just want familiar. We want our content, our services that we already own on our phone. We just want the car to have the representation of that on demand," Bajarin said.

To get the systems, GM customers will have to purchase a new Chevrolet equipped with the brand's "MyLink" touch screens, which are available on many entry-level models.

Once people plug into the car's USB port, the system will convert the screen to resemble the phone. The system will then be able to play a person's music library, log on to music apps with a touch, send and receive text messages by voice, and even call up Apple or Google Maps for navigation.

The number of available apps will be limited to avoid driver distraction, GM officials said. Many can be controlled by voice commands, and video won't be supported by the car system.

To work with MyLink, Android phones must have at least the Lollipop 5.0 operating system, while Apple CarPlay requires an iPhone 5 or newer model.

GM will provide CarPlay or Android Car for no additional cost. Although this might cause some drivers to shun MyLink, GM believes that ultimately giving consumers the choice will help it sell more cars, said Saejin Park, the company's director of innovation and portfolio planning.

Mark Boyadjis, senior analyst for infotainment at IHS Automotive, said the decision doesn't necessarily mean the death of MyLink, Ford's Sync and other systems. The automakers' systems have specific information about the car that Apple or Google can't duplicate â engine diagnostics, heating and air conditioning controls or even the ability to set up service appointments with dealerships, Boyadjis said.

GM officials also noted that some car owners might drive in areas without the cellular telephone coverage needed to run the Apple or Google systems. And others prefer not to plug anything in to their cars.

Initially both systems will be offered in the 2016 Spark mini car, Cruze compact, Malibu midisze car, Camaro and Camaro convertible and the Silverado pickup, both regular and heavy-duty models.

If something goes wrong with the system under warranty, Apple and Google would be responsible if the problem originates with their software. GM would handle any problems on its end such as the MyLink hardware, GM said.

Apple and Android combined control about 95 percent of the world's smartphone market, so having both systems is necessary. International Data Corp. is forecasting Android will have a 79 percent share of the smartphone market this year with Apple (iOS) a distant second at 16 percent.