Tesla Motors CEO Elon Musk said Tuesday that the company expects to start deliveries of its new SUV, the Model X, in three or four months. 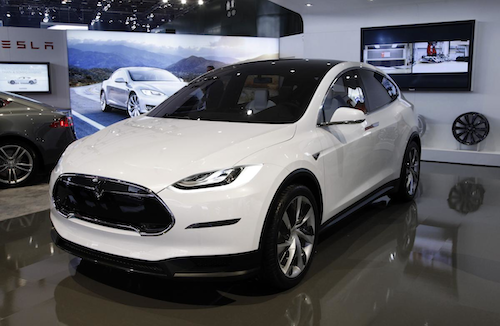 Musk also told investors at Tesla's annual meeting that the company plans to let some drivers start testing an autopilot feature at the end of this month.

The Model X will be Tesla's third vehicle since the company was founded 12 years ago. Currently Tesla makes one car, the Model S sedan.

Tesla originally planned to put the Model X into production in 2013, but has delayed it several times to work on technical issues. Musk said he's test- driving the Model X now and is pleased with its progress. He said the company is focused on making sure key features, like the Model X's wing-like doors and its sliding rear seats, are working properly.

"It's got to be a genuine improvement in utility and aesthetics," he said.

Tesla's autopilot feature lets the car drive itself at highway speeds. It also is expected to let owners summon their vehicles autonomously from a parking spot as long as they are on private property. Autopilot will eventually be available through a free software update to customers with recent versions of the Model S sedan. The Model X would likely have the system as well.

Musk stressed that drivers must remain alert and be ready to take back control of the wheel.

"It is simply meant as a driver-assistance feature," he said.

Musk said it will be technically feasible for the driver to fall asleep and let the car do the driving in about three years. But he said it would take several years after that for regulators to approve fully autonomous driving.

"That's my best guess right now," he said. "With each passing year, my estimate for when it happens gets closer. This is both interesting and alarming."