Despite widespread support in Wisconsin's Republican-controlled Legislature and the endorsement of right-to-work by the national GOP, one Minnesota Republican harshly criticized the proposed law and invited affected companies to consider moving across the Mississippi River. 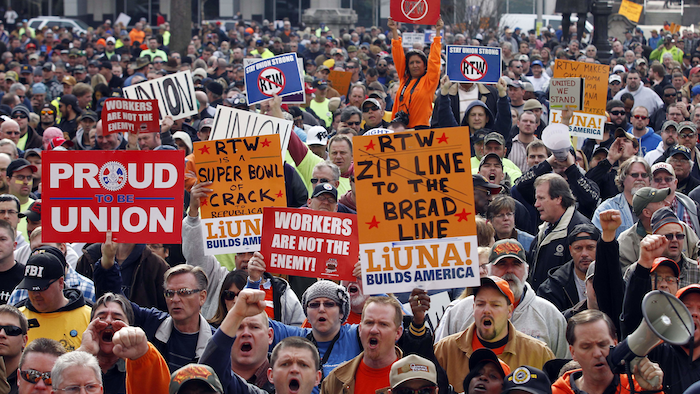 Wisconsin Gov. Scott Walker recently pledged that by the end of this week his state would become the 25th to have a "right-to-work" law on the books.

But despite widespread support in Wisconsin's Republican-controlled Legislature and the endorsement of right-to-work by the national GOP, one Minnesota Republican harshly criticized the proposed law and invited affected companies to consider moving across the Mississippi River.

"As the chair of the jobs committee here in Minnesota, if there's private sector businesses unhappy with their state government, I'm happy to offer the state of Minnesota as a better alternative," said Rep. Pat Garofalo.

In a letter to two construction company executives, Garofalo wrote that the law, which prohibits mandatory membership in unions and collections of dues as conditions of employment, injected government into voluntary agreements between private-sector businesses and laborers. He also dismissed comparing collective bargaining by teachers unions to that of construction unions, equating it to "comparing apples to hand grenades."

Although Wisconsin's major business lobbying group strongly supports the right-to-work law, a coalition largely comprised of construction companies and related businesses argued it would interfere with their employee relations and compromise training programs funded, in part, by unions.

The right-to-work law passed the state Senate last week and is poised to pass the state Assembly on Thursday; Walker pledged to sign it once it reaches his desk. Although Senate Minority Leader Jennifer Shilling conceded the bill would pass, she said she hoped Garofalo's letter would give "pause for my colleagues to think about this."

"We haven't even signed the bill yet, and Minnesota is already looking at opportunities to bring businesses and jobs into their state, really at the expense of Wisconsin," said Shilling, a Democrat whose district borders Minnesota.

But Republican Rep. Dean Knudson, whose district also borders the North Star State, said GOP members "have full confidence that our record of lower taxes, less regulation, and an attractive business climate stands strong against Minnesota’s choice to tax and spend."
Minnesota Republicans attempted to enact a right-to-work constitutional amendment in years past only to see the effort fail at the committee level. Garofalo said he had not seen backlash from his GOP colleagues for his letter or his position on the Wisconsin law.