Since a surprise takeover in 2012 by German automaker Volkswagen, Italian sports bike maker Ducati has enjoyed an era of much-needed financial stability that it has ridden to record sales. 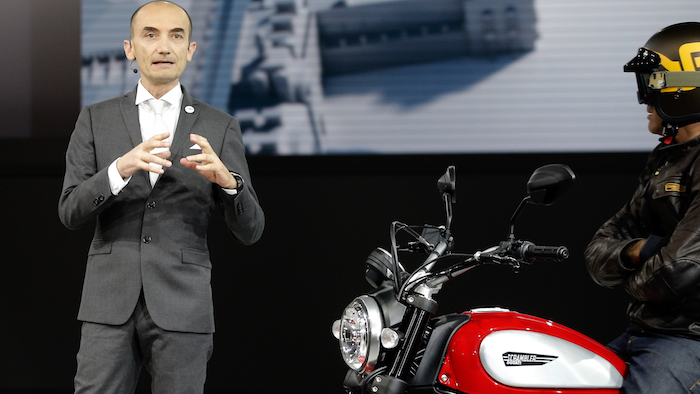 BOLOGNA, Italy (AP) — Since a surprise takeover in 2012 by German automaker Volkswagen, Italian sports bike maker Ducati has enjoyed an era of much-needed financial stability that it has ridden to record sales.

But don't expect Ducati bikes to start flooding the market. CEO Claudio Domenicali is focused on protecting the aura of exclusivity surrounding the brand, which is best known for its success on global racing circuits.

"We will stay a premium brand," he said in a recent interview with The Associated Press at the company's factory and headquarters in the Borgo Panigale neighborhood of Bologna.

Ducati sold 7,400 motorcycles in June, a 60 percent increase over the same month last year. And through the first half of the year, the company increased sales by 22 percent to a record 32,600 motorcycles delivered.

While Ducati is pleased with those results, Domenicali says the company is not looking to increase sales volume to a specific number: "We are not targeting to go 100,000 motorcycles."

This year's sales include 9,000 deliveries of the Scrambler, a new retro-styled brand aimed at customers who may not have traditionally considered buying a Ducati. Some enthusiasts have been critical of the laidback Scrambler — complete with its own yellow logo and line of clothing and accessories — as a departure from the Ducati's racing roots. The Scrambler's 75 horsepower, for example, is just a fraction of the 205 horsepower erupting from Ducati's top-of-the-line Panigale 1299 S superbike.

Domenicali shrugs off those concerns.

"It's part of a character that is more about lifestyle, and easygoing," Domenicali says, noting Ducati still sells a range of high performance street bikes — in their traditional red paintjob.

Domenicali was named the CEO of Ducati in 2013, the year after the company was bought by Volkswagen subsidiary Audi. He previously ran Ducati's racing division, directed research and development and served as general manager for operations and product development.

The Volkswagen takeover, he says, was fundamental in boosting Ducati sales — not only by providing stable ownership but also through its focus on customer satisfaction, as opposed to mere financial returns.

"That changes the world, you know?" Domenicali said. "Because you are not just reporting to either just the stock exchange or the banks and trying to keep them happy, but trying to keep the customer happy," he said.

Ducati's racing heritage is something that is as fundamental to the brand as it is to the iconic sports cars built 25 miles to the west, he said.

"We like to think that we are like Ferrari, but Ferrari is a dream and Ducati is a dream you can achieve," he said. "Because you actually can buy a Ducati."

"They gain the sexiness of the brand," he said. "Cars of course are interesting, but sometimes are not as exciting as bikes."

The United States is Ducati's largest market. Like other European and Japanese motorcycle manufacturers, Ducati has been working on ways to cater to American tastes that tend to favor large-displacement bikes known as cruisers and baggers.

Domenicali was coy, however, about what plans he has for the U.S.

"Will it be a cruiser, or a bagger, or a tourer, or a scooter, or a four-wheel ATV or a snow mobile?" he said. "As long it's a sports snow mobile, we can make even the snow mobile."