BMW CEO Harald Krueger collapsed Tuesday during a news conference at the Frankfurt auto show and was helped off stage by staff. His condition was not serious, the company said later. 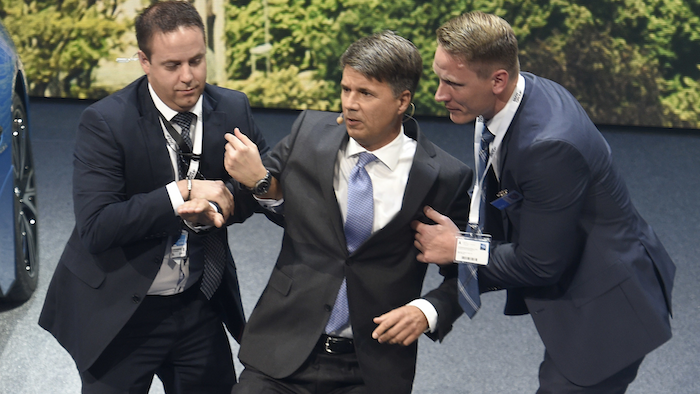 FRANKFURT, Germany (AP) — BMW CEO Harald Krueger collapsed Tuesday during a news conference at the Frankfurt auto show and was helped off stage by staff. His condition was not serious, the company said later.

Krueger stumbled backward and fell on his back during the first five minutes of the presentation of the German auto house's new lineup.

Staff rushed to help Krueger back on his feet, and he rubbed the back of his head, looking stunned as he was lifted up and led off stage by staff.

BMW spokesman Maximilian Schoeberl said that 49-year-old Krueger had been recently traveling a lot, and was not feeling well ahead of the presentation but decided to go ahead with it.

Schoeberl said Krueger, who took over as BMW's CEO earlier this year, was seen by a doctor following the incident, who recommended that he cancel his other appointments for the day and rest at home.

"His condition is not worrisome, they've ruled out anything serious," Schoeberl said.

A round table Krueger was to hold with journalists was instead conducted by the company's CFO.