As families of the lost Challenger astronauts gather with NASA to mark the space shuttle accident's 30th anniversary, there's a new voice to address the crowd.

CAPE CANAVERAL, Fla. (AP) — As families of the lost Challenger astronauts gather with NASA to mark the space shuttle accident's 30th anniversary, there's a new voice to address the crowd.

Fulgham — not Rodgers — will be on the stage for Thursday morning's ceremony at the Kennedy Space Center Visitor Complex. And making a rare appearance in the audience will be schoolteacher Christa McAuliffe's son, Scott, with his own family.

"It's going to be wonderful to watch the pages turn," Rodgers said earlier this week. The second generation "can now speak for our family and speak for the nation," she said, adding that she's looking forward to these grown astronauts' children "sharing their stories, their beliefs and their leadership."

Steven McAuliffe, a federal judge in Concord, New Hampshire, still declines interviews about his late wife Christa, who was poised to become the first schoolteacher in space. But he noted in a statement that although 30 years have passed, "Challenger will always be an event that occurred just recently. Our thoughts and memories of Christa will always be fresh and comforting."

McAuliffe said he's pleased "Christa's goals have been largely accomplished in that she has inspired generations of classroom teachers and students." She would be proud, he noted, of the Challenger Learning Centers.

McAuliffe is presiding over a trial this week in Concord, and so son Scott will represent the family, part of the next-generation shift. Scott and his sister are now in their 30s. The McAuliffes normally do not take part in these NASA memorials, so Scott's presence is especially noteworthy.

Along with the other Challenger families, Rodgers established the Challenger Center for Space Science Education just three months after the shuttle disintegrated in the Florida sky. Unusually cold weather that morning left Challenger's booster rockets with stiff O-ring seals; a leak in the right booster doomed the ship.

Today, there are more than 40 Challenger Learning Centers focusing on science, technology, engineering and math, mostly in the U.S. More are being built.

"They're not just a field trip for kids. They're actually lessons learned," said Rodgers, an educator who lives in Chattanooga, Tennessee. "That's why they've lasted."

McAuliffe's backup, Barbara Morgan, a schoolteacher from Idaho, rocketed into orbit in 2007 aboard Endeavour as a fully trained astronaut. Morgan was invited to speak Thursday at Rodgers' request.

The event will honor the Columbia Seven as well, along with the three Apollo 1 astronauts killed during a launch pad test on Jan. 27, 1967. NASA also plans observances at Arlington National cemetery, Johnson Space Center in Houston and elsewhere.

At Kennedy, the Scobee contingent will number 12, including June's son Richard, a major general in the Air Force, and a 16-year-old granddaughter.

Dick Scobee was 46 years old when he died aboard Challenger barely a minute into the flight. Both his children are now in their 50s.

"For so many people, 30 years, it's definitely history. It's in the history books," Rodgers said. For the family, "it's like it's just happened, which in a way keeps Dick Scobee young in our hearts, and the joy and excitement he had for flying." 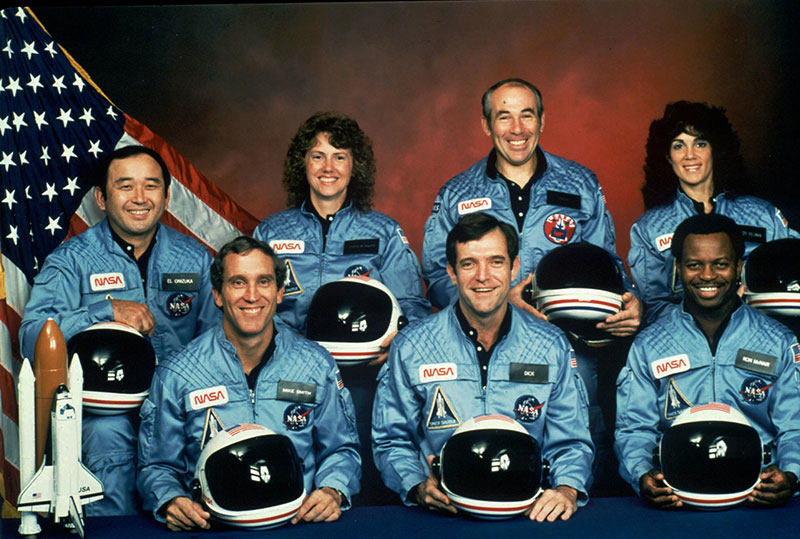 This photo provided by NASA shows the crew of the Space Shuttle Challenger mission 51L. All seven members of the crew were killed when the shuttle exploded during launch on Jan. 28, 1986. Front row from left are Michael J. Smith, Francis R. (Dick) Scobee, and Ronald E. McNair. Front row from left are Ellison Onizuka, Christa McAuliffe, Gregory Jarvis, and Judith Resnik. (NASA via AP)
Latest in Home