Retailers Fret as Products Languish on Ships, Docks at Ports

Stores gearing up for warmer weather are fretting that they won't have some products to sell due to a labor crisis at West Coast seaports. 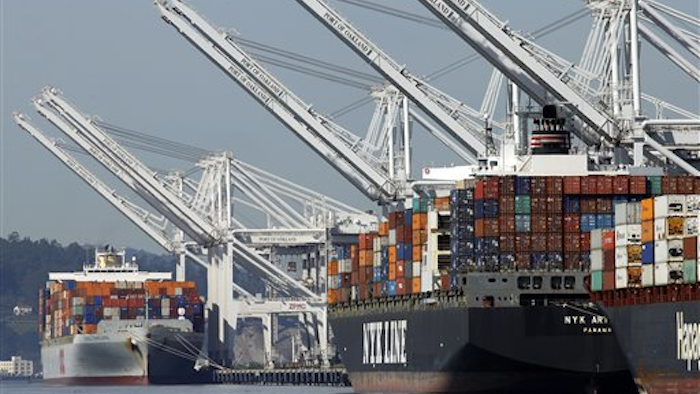 Los Angeles, California — It's early for many Americans still sloshing through winter to plan their gardens, home improvements and spring sports leagues, but stores gearing up for warmer weather are fretting that they won't have some products to sell due to a labor crisis at West Coast seaports.

The critical gateways for international trade have become more like parking lots for massive cargo ships that haul a you-name-it selection of consumer goods made in Asia and return there with U.S. exports.

The result: Containers of shovels, fencing, bathroom tiles, shoes, even parts to make summer camp footlockers are stuck at the docks or on ships anchored just offshore.

So are car parts, medical equipment and furniture. And U.S.-produced perishables, including meat and produce, are unable to be sent to Asian consumers.

"Someday the snow will melt back East. There's a huge market for those home-improvement and garden articles," said Mark Hirzel, president of the Los Angeles Customs Brokers and Freight Forwarders Association, whose members help companies get imports to distribution warehouses and send exports overseas.

For now, many of those products are stuck.

Dockworkers and their employers have been negotiating a new contract since May, but in recent weeks talks have stalled, all but paralyzing 29 ports that handle about one-quarter of U.S. international trade. That's around $1 trillion worth of cargo annually.

In the latest twist, companies that run marine terminals locked out the majority of dockworkers Thursday. Employers didn't call crews to operate the towering cranes that hoist cargo on and off ships.

The partial lockout also is planned for Saturday, Sunday and Monday. Each is either a holiday or weekend for which employers would have to pay dockworkers extra — and with contract dispute, that is not going to happen.

Friday is a normal workday and employers plan to hire full crews.

Employers say dockworkers have intentionally slowed their work for months and won't be rewarded with higher wages. The dockworkers' union denies slowing work.

Talks have stalled over how to arbitrate future workplace disputes. Some of the biggest issues, including health care, have been resolved with tentative agreements.

The International Longshore and Warehouse Union vigorously disputes that figure. Spokesman Craig Merrilees said wages typically range from $26 to $36 an hour and noted that many longshoremen are not full-time employees.

As the two sides quarrel, a backup of ships that extends into the Pacific will only grow. On Thursday, 14 ships laden with containers of goods were anchored outside the ports of Los Angeles and Long Beach; another 11 were awaiting berths outside the ports of Oakland or Seattle and Tacoma in Washington.

Among the importers with goods on the water is AICO Furniture, whose manufacturers are in Asia. In total, 70 containers are either stuck or on their way with no obvious way to get unloaded, said Martin Ploy, the company's president.

At a Capitol Hill news conference, lawmakers discussed other impacts of the backlog. Rep. Bob Gibbs, R-Ohio, said a major supplier of medical equipment in his state told him it is rationing protective clothing for health care workers because of trouble getting imports.

Exporters also are suffering, notably producers of products such as hay and potatoes, as well as pork and beef.

Cargo began moving slowly across the troubled West Coast waterfront months ago. Containers that used to take two or three days to hit the highway have been taking a week or more.

Some importers have reacted by diverting shipments to ports on the East and Gulf coasts. Others have turned to air cargo, paying a premium that can be five or more times more than the cost of sea-borne shipments.

In recent days, the union said companies are exaggerating the extent of congestion so they can cut dockworker shifts and pressure negotiators into a contract agreement.

Negotiations resumed Thursday in San Francisco — the first day the two sides have met since Feb. 6 — amid increasing pressure from elected officials and businesses to reach a deal.