State Senate Speaker Ron Ramsey said that it may have been "a mistake" for Tennessee to subsidize the development of the General Motors plant outside Nashville because it has a United Auto Workers union contract. 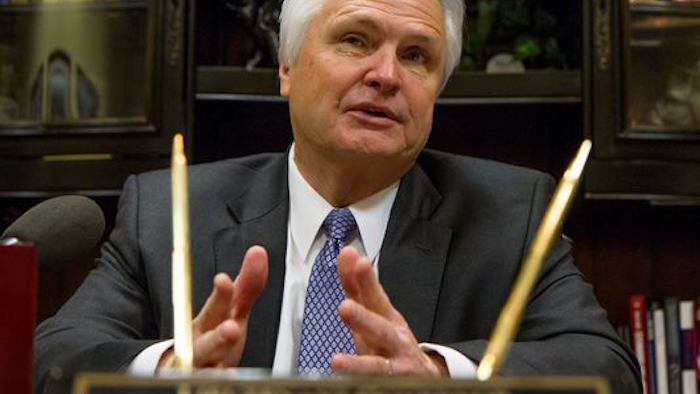 State Senate Speaker Ron Ramsey said that it may have been "a mistake" for Tennessee to subsidize the development of the General Motors plant outside Nashville because it has a United Auto Workers union contract.

The Blountville Republican's comments came as GOP lawmakers seek assurances from Volkswagen that the German automaker will remain neutral on labor issues at its assembly plant in Chattanooga.

Volkswagen officials visited the Capitol a day earlier to meet with legislators considering a $166 million incentive package to add production of a new SUV at the plant.

Republican lawmakers have grumbled about the United Auto Workers union's ongoing role at the plant, and Ramsey pointed to the thriving Nissan plant in Smyrna as an example of the benefits of nonunion auto production.

"Maybe we made a mistake years ago with the things we did for Saturn, because it's been up and down, closed and open, and yet Nissan is booming right now," Ramsey said.

The GM plant in Spring Hill began its life as a dedicated Saturn factory, producing more than 3.7 million vehicles between 1990 and 2007. Most of the facility's workers were then furloughed while the plant underwent a $600 million overhaul to build the Chevrolet Traverse crossover.

At its peak, the facility employed nearly 8,000 workers. But that number had dwindled to about 630 by 2009, when auto assembly was idled during the Great Recession.

Production was restarted following a 2011 contract agreement with the UAW that included salary concessions for entry-level workers. The plant now employs about 2,000 workers.

Mike Herron, the chairman of UAW Local 1853 in Spring Hill, said organized labor has played "a critical role" in developing the auto industry in Tennessee. He noted that while as many as half of the workers at Nissan are temporary employees, all of the blue-collar jobs at GM have permanent status and benefits.

"These jobs give people the opportunity to be part of the middle class," Herron said. "If you really take a look at some of the stuff happening at Nissan, do we really want — in the state of Tennessee — that to be held up as our pinnacle of success?"

The UAW narrowly lost a unionization vote at the Volkswagen plant in Chattanooga last year, but the union has since qualified for a new labor policy at the plant that grants access to meeting space and to regular discussions with management. The policy stops short of collective bargaining rights.

The union is also trying to organize Nissan's plants in Smyrna and Canton, Mississippi, and Daimler AG's Mercedes-Benz plant in Tuscaloosa, Alabama.

Ramsey's comments follow a recent statement by Kentucky Gov. Steve Beshear that he sees his state's neutrality on labor matters as "a positive sales point" for potential automotive investors, especially in contrast to the turmoil over the UAW in Tennessee.

"I'm not trying to tell Tennessee or any other state how to handle their economic development efforts," Beshear said. "I can just say that in Kentucky we would welcome either type of situation, either companies with unions or without them."

Like Tennessee, Kentucky has both UAW-represented factories and nonunion plants.