President Barack Obama on Friday defended his pursuit of a sweeping trade pact as good for American workers in a global economy, dismissing fierce opposition from his own party as a "ratification of the status quo." 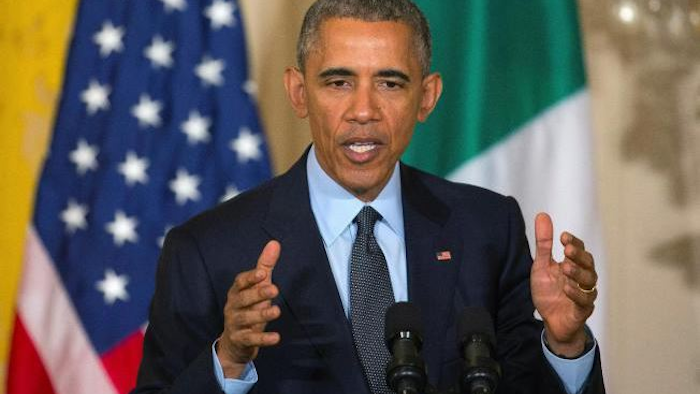 President Barack Obama on Friday defended his pursuit of a sweeping trade pact as good for American workers in a global economy, dismissing fierce opposition from his own party as a "ratification of the status quo."

The challenge for the Democratic president was on stark display hours before he began speaking at a White House news conference. Earlier in the day, Michigan Rep. Sander Levin, the senior Democrat of House Ways and Means Committee, declared he was "out to defeat" the legislation because, he said, it would cost U.S. jobs and damage the environment. Only a few Democrats in the House, Levin predicted, would support the legislation.

Obama said the authority he sought is the same exercised by past presidents of both parties. And the pact he's seeking with 11 Pacific nations would prevent countries like China and Japan from having a leg up in global commerce.

"Being opposed to this new trade agreement is essentially a ratification of the status quo, where a lot of folks are selling here, but we're not selling there," Obama said at a news conference alongside Italian Prime Minister Matteo Renzi.

He pointed to the various brands of Japanese-made cars filling the streets of Washington compared to a lack of GM, Chrysler and Ford vehicles in Tokyo.

"We cannot stop a global economy at our shores," he said. "We've got to be in there and compete. And we've got to make sure we're writing the rules so that we've got a level playing field."

His comments came as many Democrats criticized the deal, announced Thursday, on the broadest bipartisan trade bill in years.

Under the agreement reached in Congress, Obama would get so-called trade promotion authority to negotiate trade pacts that Congress could approve or reject, but not change. Congress still has to vote on such fast-track authority, and many Democrats, including strong Obama allies, have vowed to fight it.

"This is a time for presidential leadership," the Kentucky Republican told The Associated Press in a telephone interview, predicting most Republicans will vote for the bill. "Stand up, Mr. President. Make the arguments and deliver the Democratic votes we'll need to get it passed."

Backing the measure are Senate Finance Committee Chairman Orrin Hatch, R-Utah; the panel's top Democrat, Sen. Ron Wyden of Oregon, and Rep. Paul Ryan, R-Wis., chairman of the House Ways and Means Committee. But as of Friday, the bill lacked a House Democratic sponsor — an indication, Levin said, that the legislation was likely to win only a "handful" of Democratic votes.

House and Senate committees plan to consider the measure next week, ahead of Japanese Prime Minister Shinzo Abe's address to a joint meeting of Congress on April 29.

Obama faces opposition from key labor and environmental groups that form much of the liberal base of his party. The rift puts Obama's would-be successor, Democratic presidential candidate Hillary Clinton, in an awkward spot as she launches a campaign to unite the party behind her.

Obama sought to reassure critics by saying deals with Asia and Europe would have enforceable labor and environmental protections and heed concerns about human rights.

"In many ways, this is the most far-reaching and progressive trade promotion authority that we have seen going through Congress'" Obama said. "It is entirely understandable that there is some skepticism around trade from working families who saw manufacturing collapse and jobs being outsourced."

Overseas, Obama wants the clout of boosting the United States' competitiveness in the global marketplace. He's seeking authority to negotiate the Trans-Pacific Partnership, which would establish a trade accord between the United States, Japan, Vietnam, Canada, Mexico and seven other Pacific rim nations.

Levin dismissed the labor and environmental provisions as ineffectual. And other groups — the AFL-CIO, the Teamsters, the Sierra Club — stepped up their pressure on lawmakers to oppose the bill. Such agreements, they argue, wind up destroying jobs in the U.S. and creating jobs in nations that lack the environmental and worker safety protections that exist in the United States.

Teamsters General President James Hoffa said the bill "would allow secret trade pacts to sail through Congress with no chance to alter them. That's bad for American workers as well as their families."

Big business groups such as the U.S. Chamber of Commerce pushed back with an endorsement of the bipartisan bill. Obama said he wasn't supporting it for them, but for American workers.

"I didn't get elected because of the sponsorship of the Business Roundtable or the Chamber of Commerce," Obama said. "Those aren't the ones who brung me to the dance."