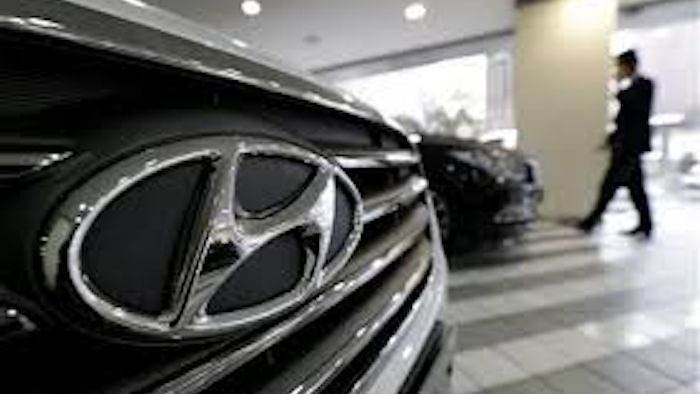 South Korea's largest automaker has sold or leased 273 Tucson fuel cell SUVs since beginning production in 2013, lower than its 1,000 target, mostly in Europe and California.

Kim Sae Hoon, general manager at Hyundai's fuel cell engineering design team, said fuel cell cars represent a bigger opportunity than electric cars because competition is less fierce. Hydrogen-powered cars also give more flexibility to designers, he said. They can be scaled to big vehicles such as buses as well as small cars.

They can also be refueled as quickly as gasoline cars while traveling more miles than electric vehicles. The Tucson's Europe model, called ix35 Fuel Cell, can travel up to 594 kilometers (369 miles) while its U.S. model travels up to 265 miles (426 kilometers) on one charge. It emits water vapor and no greenhouse gases.

High prices and the dearth of fueling stations are barriers to sales of fuel cell vehicles. Hyundai said it will be another 10 years before hydrogen cars start gaining wider acceptance. In the meantime, sales of eco-friendly cars are dominated by hybrid models such as Toyota's Prius and electric vehicles such as Nissan's Leaf, which are more affordable than fuel cell cars.

South Korean customers are local government offices as there is no government subsidy for consumers. South Korea's government plans to establish 10 charging stations for fuel cell cars and expects 1,000 hydrogen-powered vehicles will be on the streets in South Korea by 2020.

Toyota started sales of its Mirai fuel cell sedan in December and has decided to increase production to 3,000 vehicles in 2017, which is quadruple production this year. The company said it received 1,500 orders in the first month of sales in Japan.