Four trains hauling crude oil have derailed in the U.S. and Canada since mid-February. The derailments have deepened safety concerns that if an oil-train accident were to occur in a populated area, the results could be disastrous. 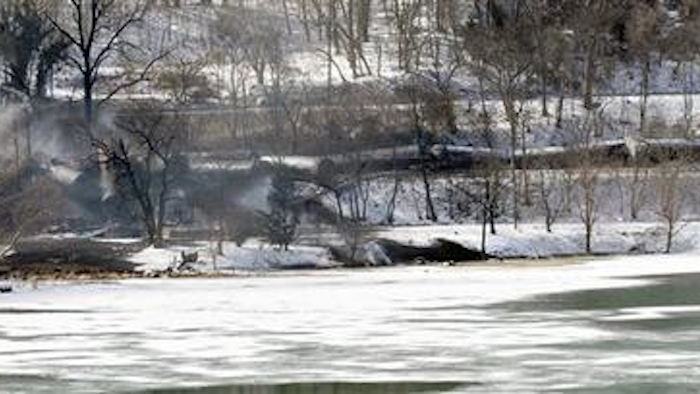 Four trains hauling crude oil have derailed in the U.S. and Canada since mid-February, rupturing tank cars, spilling their contents, polluting waterways and igniting spectacular fires that burned for days.

The derailments have deepened safety concerns that if an oil-train accident were to occur in a populated area, the results could be disastrous.

"Recent incidents have proven once again that derailments of trains carrying this product are dangerous, and can be catastrophic," said Sarah Feinberg, acting administrator of the Federal Railroad Administration.

Where have derailments taken place?

The recent spate of accidents began Feb. 14 when a 100-car Canadian National Railway train hauling crude oil and petroleum distillates derailed in a remote part of Ontario, Canada. Less than 48 hours later, a 109-car CSX oil train derailed and caught fire near Mount Carbon, West Virginia, leaking oil into a Kanawha River tributary and burning a house to its foundation.

On Thursday, 21 cars of a 105-car Burlington Northern-Santa Fe train hauling oil from the Bakken region of North Dakota derailed about 3 miles outside Galena, Illinois, a town of about 3,000 in the state's northwest corner. On Saturday, a 94-car Canadian National Railway crude oil train derailed about 3 miles outside the Northern Ontario town of Gogama and destroyed a bridge. The accident was only 23 miles from the Feb. 14th derailment.

The worst such accident in recent years involved a runaway train derailed in Lac-Megantic, Quebec, just across the U.S.-Canada border from Maine, on July 6, 2013. The resulting explosions and fire killed 47 people and destroyed the town's business district.

Why are there so many of these accidents?

The number of accidents is going up because the oil boom in the U.S. and Canada has dramatically increased the amount of oil shipped by rail. Last year, railroads moved 493,126 tank cars of crude oil, compared to 407,761 in 2013. That's up from just 9,500 cars in 2008 before the hydraulic fracturing boom took off in the Bakken region of North Dakota, Montana and Canada, as well as other areas.

Many factors can cause an accident, from too great a speed to operator fatigue. We won't know the cause of the most recent ones until investigations are complete, but weather may be a factor. When it is very cold, as it has been across much of North America, steel rails and train car wheels can contract and become brittle. If the steel has a manufacturing flaw, no matter how small, it can spread rapidly in the cold weather.

"You get real cold weather like this and a rail can just snap ... a wheel will shatter like a piece of glass," said Ed Dobranetski, a former National Transportation Safety Board rail accidents investigator.

The Transportation Safety Board of Canada said investigators have recovered a section of broken rail containing a rail joint and a broken wheel "that are of interest" in the Feb. 14 derailment.

What is the government doing to prevent them?

U.S. officials are working on new regulations to increase the safety of train operations and of the special tank cars that carry oil. Draft regulations were sent to the White House budget office for review on Feb. 4. Among other things, the proposal includes tank cars that have thicker shells and electronically controlled brakes that stop cars at the same time rather than sequentially.

"There will not be a silver bullet for solving this problem," Feinberg said. "This situation calls for an all-of-the-above approach — one that addresses the product itself, the tank car it is being carried in, and the way the train is being operated."

U.S. and Canadian officials are trying to coordinate changes because trains cross back and forth across the border. So far, there is no consensus on a timetable for phasing out older, less-safe tank cars.

What can railroads do to prevent accidents?

Brigham McCown, a former head of the federal agency that regulates rail transport of hazardous materials, said an array of new technologies patented within the last decade can warn of defects and identify trouble spots before accidents happen.

For example, sensors can be put on the lead locomotive to measure rail thickness, detect deformities and alert engineers, he said. Sensors can also be placed under track or next to rail ties to detect movement in track beds, or on cars to detect a broken wheel, he said.

"Given the sheer volume of hazardous materials and crude oil, we simply can't afford to have these rail cars come off the track," McCown said.