Toyota is shrugging off a sales plunge in China set off by a territorial dispute and says it is headed to a record year on the back of strong growth in the rest of Asia and the U.S. Toyota Motor Corp. Executive VP Funo acknowledged that achieving the company's target of 9.76M vehicle sales this year will be harder because of the problems in China. 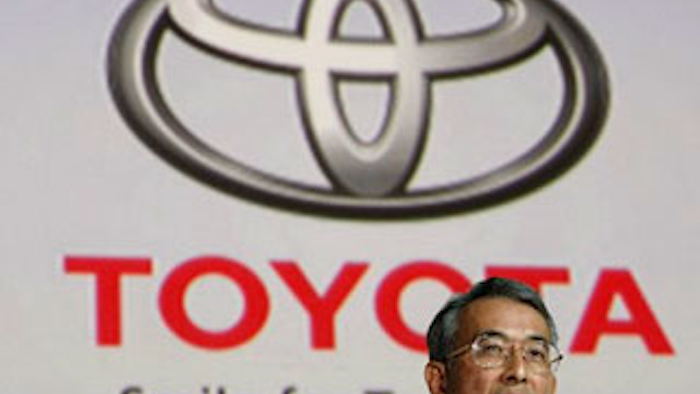 TOKYO (AP) — Toyota is shrugging off a sales plunge in China set off by a territorial dispute and says it is headed to a record year on the back of strong growth in the rest of Asia and the U.S.

Toyota Motor Corp. Executive Vice President Yukitoshi Funo acknowledged Monday that achieving the company's target of 9.76 million vehicle sales this year will be harder because of the problems in China. Violent protests and a call to boycott Japanese goods erupted after Tokyo nationalized tiny islands that are controlled by Japan but claimed by Beijing.

Toyota's sales in China the last couple of months have fallen to about half of what they were a year earlier. Initially, Toyota had expected to sell 1 million vehicles in China this year. Achieving that is now unlikely.

But Funo, who oversees Toyota's Asian operations, expressed confidence overall global vehicle sales will hit a record, surpassing the record 9.37 million vehicles sold in 2007, because growth in other parts of the world will offset the losses in China.

"Toyota's operation is well-balanced" because the company has made a point of spreading risks by building up its brand and sales in many markets, not only China, Funo said. He said Toyota makes long-term plans in various markets, and remains committed to China.

Toyota has widened its lead over the U.S. automaker, selling 7.4 million vehicles globally in the first nine months of this year, some 450,000 more than GM. Toyota's sales rose 28 percent in that period, while GM's rose 2.5 percent to 6.95 million vehicles.

China comprises a significant 10 percent of Toyota's global vehicle sales, but sales are doing well in the rest of Asia such as in Indonesia, India and Thailand.

When such gains are combined, they are significant, Funo told The Associated Press at a Toyota office in Tokyo.

Toyota sells about 320,000 vehicles a year in Indonesia and about 400,000 in Thailand, according to the company.

"It will be record sales for Toyota despite China," Funo said.

Toyota, which makes the Prius hybrid and Lexus luxury models, has struggled in recent years amid a sluggish global economy and a series of massive safety recalls, mainly in the U.S.

The earthquake and tsunami in northeastern Japan last year disrupted production, hurting Toyota just as it was starting to recover from its recall fiasco. The floods late last year in Thailand, where it has factories, added to Toyota's problems.