Factory production rose 0.2 percent in September, following a decline of 0.5 percent in the previous month, the Federal Reserve said Monday. The broader industrial production category, which includes mining and utilities, ticked up 0.1 percent.

Even with the gain, manufacturing output has been flat in the past year. Factories have been hit by several headwinds: weak business spending on machinery and other equipment, a strong dollar that has made U.S. goods more expensive overseas, and sharp cutbacks in oil and gas drilling that have lowered demand for pipeline and other supplies.

Manufacturing output showed signs of life in June and July but then fell back sharply in August.

"While better than the August data which pointed to significant weakness, the September results still only point to a manufacturing sector struggling to grow at an anemic pace," Joshua Shapiro, chief U.S. economist at MFR Inc., said. 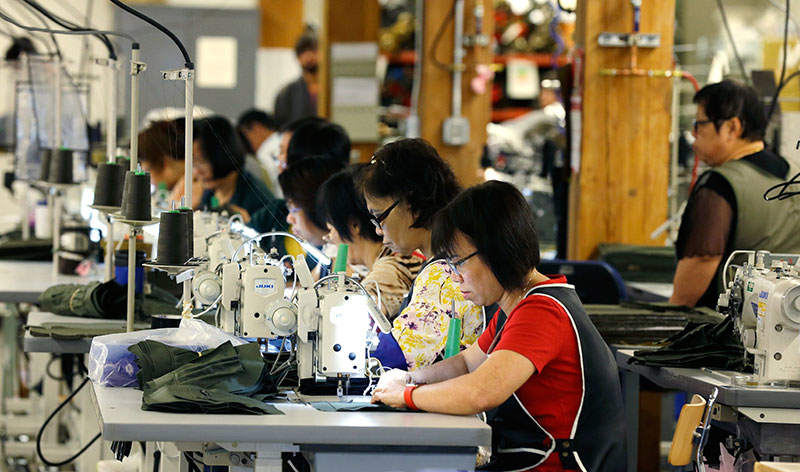 In this Wednesday, Aug. 31, 2016, file photo, a group of workers at the C.C. Filson Co. manufacturing facility work at their sewing machines, in Seattle. On Monday, Oct. 17, 2016, the Federal Reserve reports on U.S. industrial production for September. (AP Photo/Ted S. Warren, File)

Mining output rose 0.4 percent last month, though it has fallen 9.4 percent in the past year. Utility production fell 1 percent.

With manufacturing production weak in the past year, factories have shed 47,000 jobs.

Production of construction supplies rose 0.8 percent in September, a sign that homebuilders are busy. Auto production ticked up just 0.1 percent, as sales appear to be leveling off, though at a very high level. The output of petroleum and coal products increased 1.4 percent.

Other reports suggest there is some hope that factories are slowly recovering. A private survey found that manufacturers boosted production and saw a rise in new orders last month, according to the Institute for Supply Management, a trade group.

With new orders rising, production may increase in the coming months. Yet that survey found that factories were still cutting jobs.

And orders for manufactured goods increased in August, according to a separate report from the Commerce Department. A category that tracks business investment rose for the third straight month, a sign that business spending may be rebounding.

The weakness in manufacturing has weighed on the broader economy, which grew at a sluggish pace of 1.1 percent in the first half of this year. Still, many economists expect a mild acceleration in the second half of the year to roughly 2 percent.