Fuyao has spent roughly $450 million to convert the former GM factory in Moraine, near Dayton, which was closed in 2008 after nearly 30 years, and an adjacent facility. It represents China's biggest investment in the state and its eighth largest in the U.S.

The plant produces about 4 million units of glass a year for the North American market, including GM, Chrysler, Honda, Hyundai, Kia and Safelite. It employs more than 2,000 people.

The endeavor hasn't been without its hiccups.

Eight health and safety complaints have been filed against the plant over the past year, according to Occupational Safety and Health Administration (OSHA) records. Federal safety regulators found "serious" safety issues in two of those cases earlier this year, fining the company $14,000. Three inspections remain open, as the company contests those complaints, according to an OSHA spokeswoman.

Fuyao workers Cynthia Harper, 54, and Timi Jernigan, 52, said the United Auto Workers is helping file the complaints. The union is working to organize the plant, a spokesman confirmed this week.

Harper, who spent 15 years working at the plant under GM, said her safety experience since joining Fuyao in May 2015 has been "pretty rocky." She attributed part of the disconnect to different standards for safety in the U.S. and China.

"We work in a glass plant. People get cut," she said. "When we worked in a union plant, we had a safety committee, an ergonomic committee. You have those things to keep you safe." 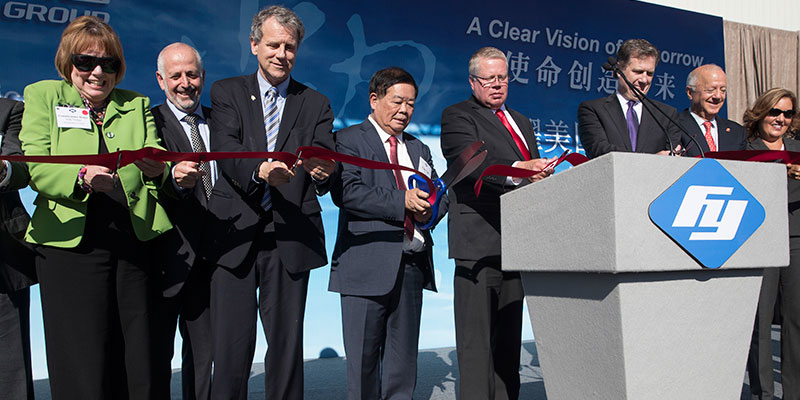 Cho Tak Wong, chairman of the Fuyao Group, center, cuts a ceremonial ribbon during the grand opening of the Fuyao Glass America plant, Friday, Oct. 7, 2016, in Moraine, Ohio. The Chinese company is ready to show off its completed automotive glass-making plant in Ohio, which serves as its North American hub for recycled glass manufacturing. (AP Photo/John Minchillo)

Fuyao Vice President Dave Burrows said the company is extremely safety-conscious. He said a very small group of employees — "maybe seven or eight people when we have 2,000 workers here" — is behind the complaints.

"Those OSHA concerns were from months before that. We had taken those very seriously already," Burrows said. "Safety is not a sometime thing here, safety is a forever thing. We have worked very, very hard in installing the safety equipment and making the plant safe for our people."

Nurses and optometrists are on hand to handle health issues and provide safe eyewear, and the company's compliance officer is a former OSHA inspector, Burrows said.

The Ohio plant is a culmination of years of patience.

The company arrived in the U.S. in the late 1980s, with a sales-only location in South Carolina. As the company emerged as an industry leader back home, producing 70 percent of automotive glass across China, it set its sights on U.S. expansion. Fuyao established a glass supply center in Detroit around 2007 and a few years later started searching for a location to set up a facility to produce replacement glass.

Michigan, Indiana and Ohio were all in the mix, said Burrows, who at the time worked for the Dayton Development Corporation.