The nation's second-largest transit network opened 40 years ago as a point of pride for Washington and its suburbs, but after decades of deferred maintenance, it has deteriorated into an example of failing infrastructure in America's cities.

In this photo taken July 25, 2016, Metro general manager Paul Wiedefeld inspects maintenance work being done in a tunnel on Metro's orange line in northern Virginia. Wiedefeld ordered a 9-month maintenance blitz that requires sections of track to be closed for weeks at a time. He said Metro can't catch up on critical maintenance by doing work only on nights and weekends. (AP Photo/Ben Nuckols)

WASHINGTON (AP) — Paul Wiedefeld stood on an overcrowded platform at Union Station, watching as trains came and went, too full to pick up more commuters. Metro was making him — the general manager of Washington's subway system — late for a meeting about customer service.

Wiedefeld was just another rider that day, angered by Metro's inability to perform basic functions. He was even more frustrated about the apparent apathy of subway workers and police officers who watched the situation unfold. When he finally reached Metro's headquarters, he stormed into the meeting and demanded changes.

"What concerned me was, it was business as usual — the whole response," Wiedefeld told The Associated Press in an interview. "It was just being handled as a normal day. I let them know that was not acceptable."

Wiedefeld, 60, is determined to do what many observers say is impossible — improve safety and reliability while reversing a slide in ridership, all without the added funding advocates say Metro needs to survive.

The nation's second-largest transit network opened 40 years ago as a point of pride for Washington and its suburbs, but after decades of deferredmaintenance, it has deteriorated into an example of failing infrastructure in America's cities.

Wiedefeld says he's confident he can fix things with his $1.8 billion operating budget.

Congress made it clear in a hearing on Metro's safety woes this spring that the system won't get another dime until he does.

"He really has, more than anyone imaginable, the capability and the experience and the vision to make this work," said former Maryland Gov. Parris Glendening, a Democrat and longtime advocate for transit and smart growth.

Providing more than 700,000 daily trips, Metro is governed by an unwieldy board of directors with competing interests in the federal government, the District of Columbia, Maryland and Virginia, which contribute operating funds based on where riders live and how much they use it. 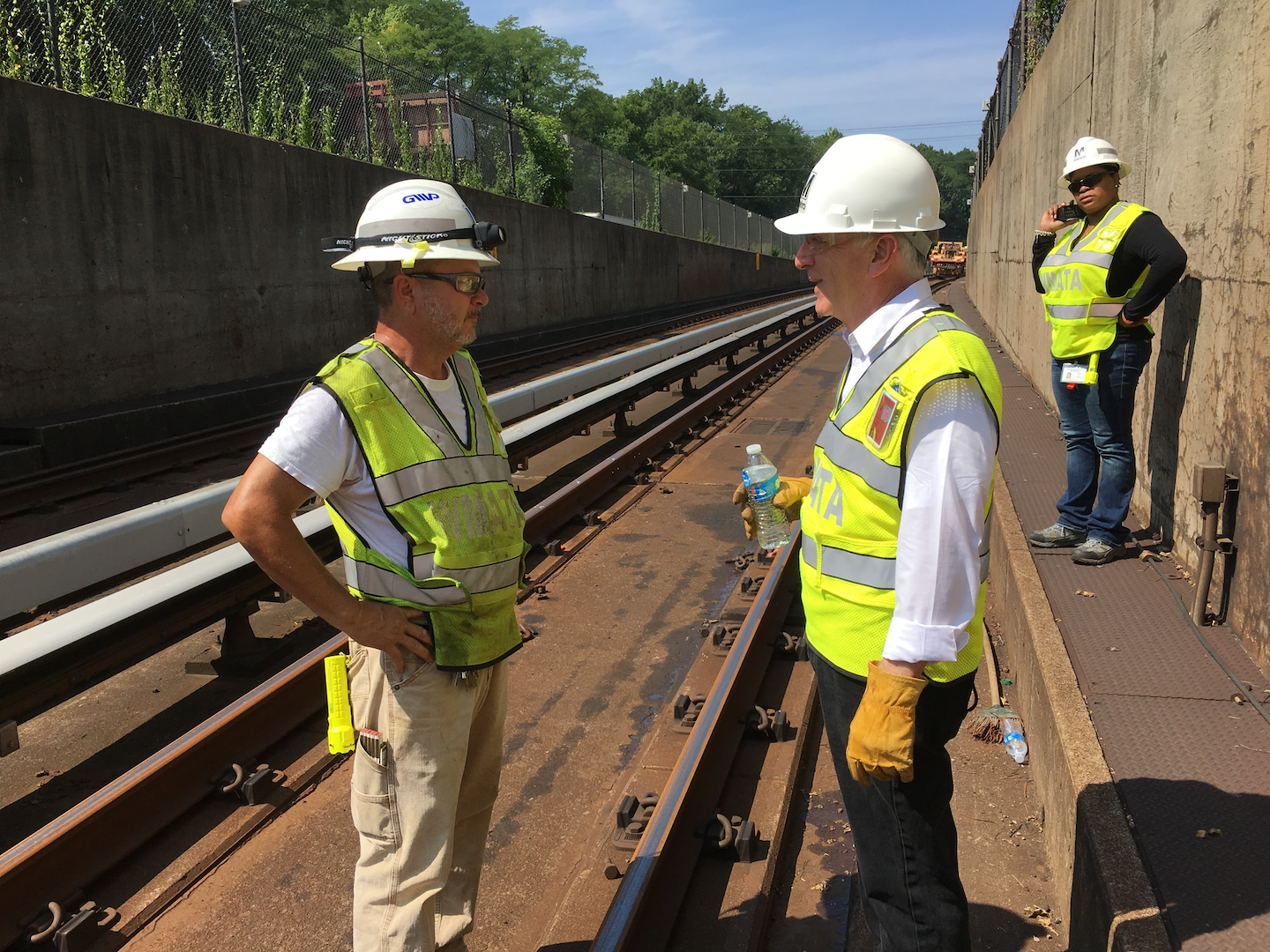 In this photo taken July 25, 2016, Metro General Manager Paul Wiedefeld, right, chats with an employee during a tour of track work being done on Metro's orange line in northern Virginia. Wiedefeld ordered the track work, which requires trains in both directions to share a single line, as part of his effort to make the deteriorating system safer and more reliable. (AP Photo/Ben Nuckols)

All jurisdictions must agree on any changes to the governing structure or funding formulas, making an overhaul unlikely, although Rep. Mark Meadows, R-N.C., said he wouldn't rule out seeking more federal money if Wiedefeld produces results.

"I believe very strongly that the challenges facing the whole Metro system are too great for any one person under the current structure," Glendening said.

Persuading federal, state and local governments to cede control to an entity as powerful as, say, the New York-New Jersey Regional Transit Authority, isn't part of Wiedefeld's portfolio — that job goes to board Chairman Jack Evans, who also serves as a D.C. Council member.

Wiedefeld's moves have been bold, if not glamorous: Shutting down the entire subway system for daylong emergency inspections and repairs, a nine-month maintenance blitz that paralyzes stations for weeks, firing operators who run red lights, and proposing a permanent end to late-night service on weekends.

Unfortunately for the unassuming public servant, these decisions have raised his profile. Now he's recognized constantly around the capital.

"The goal here is to be as boring as possible," he said.

He wants to run Metro like a public works department, not a construction company. Previous bosses were mainly focused on expansion, rather than operations, maintenance or safety, Wiedefeld said.

That inattention to maintenance has had catastrophic consequences. Eight passengers and an operator were killed in 2009 when two 1970s-era rail cars collapsed into each other on impact. Those outdated cars still haven't been completely phased out.

In January 2015, an electrical fire in a tunnel filled a train with smoke, killing one passenger and sickening dozens. Metro's general manager had already announced his retirement, and left four days after that disaster.

Choosing a replacement took months. Some board members wanted a traditional transit executive; others, a corporate turnaround specialist. After their first choice withdrew, they turned to Wiedefeld, who twice ran Baltimore-Washington International Thurgood Marshall Airport and had led the Maryland Transit Administration.

"He didn't come in from somewhere else around the country to sort of make his mark and move on. He's grounded in making this region successful," said Beverley Swaim-Staley, Maryland's former transportation secretary and a friend.

The second choice turned out to be the better one, Evans said.

"He's a real nuts-and-bolts guy," Evans said. "We don't need a turnaround financial specialist as much as we need someone, first of all, to do what Paul's doing: Oversee the reconstruction of the system."

In this photo taken July 25, 2016, Metro general manager Paul Wiedefeld inspects maintenance work being done in a tunnel on Metro's orange line in northern Virginia. Wiedefeld ordered a 9-month maintenance blitz that requires sections of track to be closed for weeks at a time. He said Metro can't catch up on critical maintenance by doing work only on nights and weekends. (AP Photo/Ben Nuckols)

Wiedefeld's grasp of details was evident during a sweltering summer day's tour on the orange line, where he interacted easily with workers replacing worn-out rail fasteners and rotting ties.

The visit bolstered his argument that temporarily closing tracks is essential: Otherwise, crews spend most of their time moving heavy equipment between midnight and 5 a.m., when trains aren't running.

One worker cleaned debris from a concrete trough by hand. "That's what we want to see," Wiedefeld said, pointing his flashlight over a grate. "The water's flying down."

Another looming challenge is negotiating a contract with Metro's 13,000 workers. Wiedefeld and the union haven't been outwardly antagonistic, but he's trying to draw the line against a union effort to reinstate a worker fired for falsifying records about a fan in the tunnel that filled with smoke in January 2015.

Metro riders who frequently gripe on social media have been giving Wiedefeld the benefit of the doubt. Stephen Repetski, an engineer and regular rider who blogs about Metro, said he's has been a solid leader but that Metro needs to give riders more information about repairs and unexpected problems.

"The communication of the organization really hasn't improved," Repetski said.

Wiedefeld is one of six children of a Baltimore firefighter and considered becoming one himself, but he wore glasses and recruits with poor vision usually weren't taken. He studied political science at Towson University and earned a master's in urban planning at Rutgers.

Now, his wife and family stay in Towson while he spends weeknights in a northeast Washington apartment.

The youngest of their three children — 23, 20 and 16 — was on his mind when he ordered the daylong shutdown in March, after a fire similar to the fatal one last year.

Wiedefeld applied his "Alice rule": If his daughter shouldn't ride the trains, nobody else would, either.

"It was the right thing to do," he said. "My children ride the system, my wife rides the system. Why would I put your children at risk?"