Tesla Offers $2.8B To Acquire SolarCity

Tesla Motors on Tuesday announced a $2.8 billion bid to acquire SolarCity as the electric vehicle maker seeks to expand its presence in renewable energy. 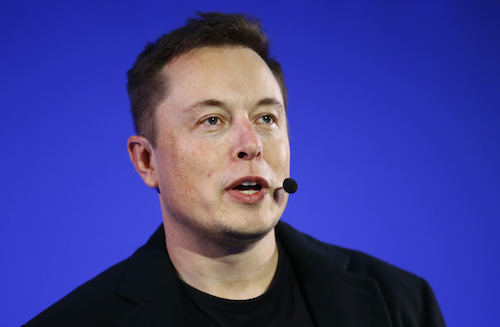 In this Wednesday, Dec. 2, 2015, file photo, Tesla Motors Inc. CEO Elon Musk delivers a conference at the Paris Pantheon Sorbonne University as part of the United Nations Climate Change Conference in Paris. Tesla Motors is set to unveil the Model 3, its first car in the $35,000 range. The Model 3 is the most serious test yet of 13-year-old Tesla’s ability to go from a niche player to a full-fledged automaker. (AP Photo/Francois Mori, File)

Tesla Motors on Tuesday announced a $2.8 billion bid to acquire SolarCity as the electric vehicle maker seeks to expand its presence in renewable energy.

The two companies, separated by a distance of some 17 miles in Silicon Valley, are already closely related. Tesla CEO Elon Musk is SolarCity's chairman and principal shareholder, while his cousin, Lyndon Rive, serves as CEO.

More importantly, Tesla last year introduced a battery division that could harness excess power from solar panels for use during nighttime hours or overcast conditions — or to send back to the broader electrical grid. SolarCity already utilizes the Tesla Powerwall system in many of its rooftop solar energy projects.

Musk, according to the Associated Press, told a conference call that the deal would maximize the companies' engineering capabilities, improve installation services and cater to similar customers.

"This is something that should happen," Musk said. "It's a no-brainer."

Tesla said it would announce further details if both sides reached an agreement. Musk and Antonio Gracias, who sits on the board of both companies, vowed to recuse themselves from votes on the merger.

Critics, however, noted that both companies continue to lose money and that SolarCity holds a particularly large amount of debt.

Investment manager Jim Chanos, who bet against both companies, called the offer a "shameful example of corporate governance at its worst" during an appearance on CNBC.