S. Africa: Search Continues For 3 Missing In Mine Collapse

A mine manager says rescue teams have removed 3,500 tons of debris in their search for three people still trapped underground after a collapse at a South African mine. 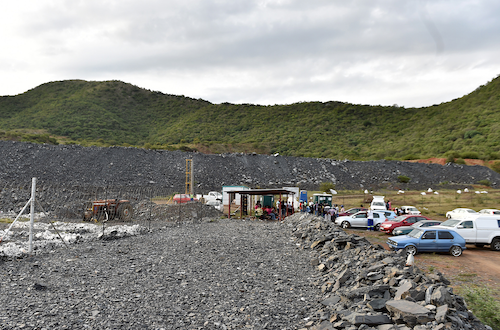 Family members and friends of three missing persons wait outside the Vantage Goldfields Limited's Lily Mine's entrance near Barberton, South Africa, Friday Feb. 5, 2016. A miners' union spokesman in South Africa says three people remain missing after a building collapsed above a gold mine, trapping dozens of people. The spokesman said earlier that 87 people were trapped above and below ground. The cause of the collapse is believed to be a sinkhole, according to emergency services. (AP Photo)

BARBERTON, South Africa (AP) — A mine manager says rescue teams have removed 3,500 tons of debris in their search for three people still trapped underground after a collapse at a South African mine.

General manager of the Makonjwaan Lily gold mine Mike Begg said Sunday that rescuers are trying to recover a mobile office container that sank when the mine collapsed.

The mine in the eastern Mpumalanga province collapsed on Friday after an underground pillar caved in, creating a sinkhole that swallowed the container. Two women and a man were in the mobile office at the time.

Families of the missing workers are holding prayer services throughout the search.

Themba Mnisi, whose daughter is trapped in the container, said he remained hopeful.

All 87 miners who were underground during the collapse were rescued.