A smartphone switches its orientation from portrait to landscape depending on how it's tilted. A car's airbags inflate when it senses collision forces. Colleagues from University of Calgary's Faculty of Veterinary Medicine and Agriculture wanted to know if the same accelerometer technology could be implemented in beef systems. 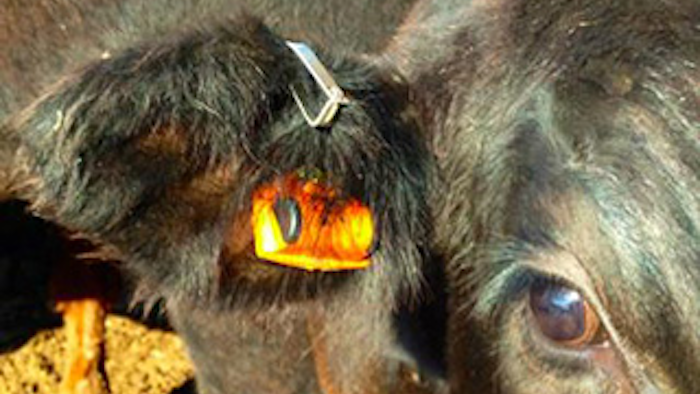 A smartphone switches its orientation from portrait to landscape depending on how it's tilted. A car's airbags inflate when it senses collision forces. By detecting earth's vibrations, a computer can measure the magnitude and aftershocks of an earthquake.

These technologies are made possible by accelerometers--small, electromechanical devices that measure acceleration. The devices are able to detect the most sensitive of motions, from the number of steps taken during a morning walk to the number of jaw movements during a heifer's morning meal. In fact, some dairy producers use these devices to measure feed intake, detect heat and notably, identify sick animals.

"We know that rumination and feeding patterns change in diseased animals long before they visually show clinical signs," said Dr. Karin Orsel, Associate Professor at the University of Calgary.

Colleagues from University of Calgary's Faculty of Veterinary Medicine and Agriculture and Agri-Food Canada wanted to know if the same accelerometer technology could be implemented in beef systems. Their 13-day study, "Technical note: Accuracy of an ear tag-attached accelerometer to monitor rumination and feeding behavior in feedlot behavior," can be found in June's issue of the Journal of Animal Science.

Calgary's study is one of the first to monitor use with an in-ear accelerometer unit (developed by SensOor; Agis Automatisering BV, Harmelen, The Netherlands.) SensOor's CowManager system uses a proprietary algorithm to quantify ear movements, as well as time spent feeding, ruminating, resting, and being active. It records these actions and relays it to an online program, which can also be downloaded as an app on a smartphone.

"The SensOor has proven its application in dairy cattle," said Orsel. "[This] method is potentially able to identify diseased animals before the feedlot crew."

A past study conducted by Goldhawk et al. attempted to monitor beef cattle rumination via neck collars. Microphones on the collars were validated to successfully collect rumination data for adult dairy cows. However, the Goldhawk et al. study proved their use poor in beef systems, possibly due to physical differences like dewlaps, neck musculature and skin thickness.

To test the accuracy of the ear tag-attached unit in beef steers, two human observers monitored the feeding and rumination behaviors of steers with ear tag-attached accelerometers. Their live observations were then compared with the data collected electronically by the in-ear devices.

"The accelerometer seemed to be a promising tool to measure feeding behavior in beef cattle but needs improvement for measuring rumination," Calgary researchers wrote.

More studies need to be conducted to validate the technology before it can be used to detect disease. Consequently, the team at Calgary also applied the ear tags in a Bovine Respiratory Disease (BRD) study, but since few animals actually contracted the sickness during the trial, a relation between rumination and feeding events couldn't be shown. Still, the few animals that did contract BRD showed "very distinct patterns of rumination."

"That allows for some optimism," said Orsel. "As a researcher I have a strong [belief] in the applicability of this technology."