Cuba Looks North to US Farmers for Help with Food Crisis

Cuba spends roughly $2 billion a year to import about 80 percent of its food and a long-standing humanitarian exception to the trade embargo allows U.S. farmers to fill some of that demand. After years of declining sales, mostly Republican states sold nearly $300 million of food to the island last year, primarily frozen chicken and soybean products 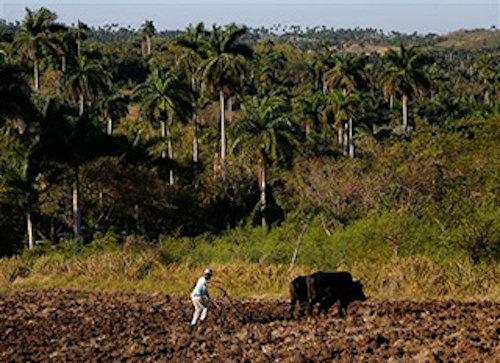 Pink piglets nosed for scraps under the admiring gaze of former President Ronald Reagan's first secretary of agriculture and about a dozen other U.S. farmers and trade officials who may represent Cuba's best hope for ending the half-century-old trade embargo it blames for most of its economic troubles.

On Wednesday, their delegation of about 90 representatives of U.S. agriculture will wrap up three days of meetings with Cuban officials and farmers as part of a lobbying campaign for the elimination of the embargo.

"It's a matter of time," former Agriculture Secretary John Block, who is an Illinois hog farmer and Washington lawyer, said as he toured the 247-member cooperative farm outside Havana. "It'll be lifted and we'll have normal relations. We should have done it a long time ago."

President Barack Obama's loosening of the embargo unleashed a flurry of moves from U.S. companies trying to stake out positions in an untapped market. Significant trade growth appears likely to come fastest in agriculture, the sector of the Cuban economy that has the deepest ties to the United States and has been undergoing market-oriented reforms longer than any other on the island.

A bipartisan group of senators who introduced a bill last month to drop the embargo says farm and business backing is essential.

Cuba spends roughly $2 billion a year to import about 80 percent of its food and a long-standing humanitarian exception to the trade embargo allows U.S. farmers to fill some of that demand. After years of declining sales, mostly Republican states sold nearly $300 million of food to the island last year, primarily frozen chicken and soybean products. American trade officials and farmers are dreaming of dominating a food import market that could grow to $3 billion in coming years if Cuba's economy improves.

"We've been here and we want to stay here," said Stephanie Robinson, marketing and development director for the Virginia Department of Agriculture.

Obama's changes appear to allow exports of U.S. farm equipment to hundreds of thousands of Cuban farmers who belong to member-run businesses like the May First Credit and Service Cooperative farm outside Havana.

Imports and advice from the U.S. could help Cuba ramp up production levels that have been slumping for years. The island once exported sugar, tobacco and citrus to the United States and imported lots of U.S. rice and other goods. After more than 50 years of central planning and embargo, the island's agricultural production has drastically fallen and the resulting high price of food is the primary source of dissatisfaction for many Cubans.

A year after assuming power from his brother Fidel in 2006, President Raul Castro launched a series of reforms to loosen near-total state control of agriculture, giving long-term loans of fallow land to private farmers and allowing them to sell surplus crops on the private market.

Agriculture today is in a state of halfway transformation. Cooperatives like May First sell roughly 30 percent of their crops at urban farm stands at market prices. They must sell the rest to the state for 30 percent to 50 percent below the market price.

Payments from the government are often late and the Ministry of Agriculture controls the sale of supplies like seeds and machinery, which are often in short supply or show up too late. Productivity is low. A cow living at May First produces about one-eighth the milk that a cow in the U.S. turns out a day.

Food prices, particularly for meat, are stunningly high for a country where the average salary is about $20 a month. U.S. and Cuban farmers comparing prices during Tuesday's stop at the cooperative found that pork and chicken are two to three times pricier in Cuba than in the U.S.

Retired hotel chef Eudelia Gonzalez bought four beets and a pork bone stripped of its meat at the farm stand run by the May First coop in Havana's Kohly neighborhood on Tuesday afternoon. The stew ingredients cost a dollar, or about a tenth of her monthly pension. Still, she said, "at least there are things to eat."

"Sometimes there are no onions, but now there are a lot of them around," she said. "You can also find potatoes for sale."

Potatoes are state-controlled goods and almost never in stock, with touts selling them outside farmers markets as if they were drugs, beckoning customers with a hissed whisper of "Potatoes!"

Detente has Cuban farmers dreaming of exporting pricey goods like seafood, tobacco and honey to the U.S. and raising productivity with modern seeds, fertilizer and equipment bought on credit. That's all currently impossible under the embargo.

"If the two countries succeed in drawing closer, it could be really good for both sides," said Jose Miguel Gonzalez Garcia, president of the May First cooperative. "There's a lot of optimism that things are really going to change."