Two weeks after Venezuela's agriculture minister announced that he would make the resumption of cacao exports a priority, piles of beans are still sitting in warehouses. 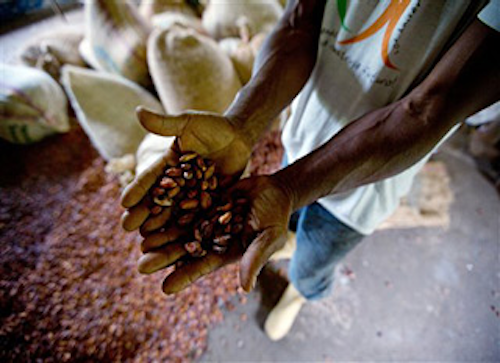 EL CLAVO, Venezuela (AP) — William Machado worked all winter harvesting palm-sized yellow cacao pods and drying the flavorful beans inside. He's part of a chocolate trade that is one of this South American county's most prized industries, but Machado increasingly fears his hard work may be in vain, squandered by a freeze on exports.

"We have nothing. We're not reaping any benefits from our harvest because we don't have buyers for the cacao," he said amid a grove of spindly cacao trees in a densely vegetated farming village on Venezuela's northern coast.

Two weeks after Venezuela's agriculture minister announced that he would make the resumption of cacao exports a priority, piles of beans are still sitting in warehouses.

The government's surprise revocation of export licenses this winter for some of Venezuela's biggest cacao exporters adds to a string of problems plaguing an industry that the socialist government once saw as a way to help wean the nation off its dependence on petroleum, which accounts for 96 percent of the country's export revenue.

Venezuela's fine cacao, the raw ingredient for chocolate, is among the most sought-after in the world. Yet sellers can't get the crop to those who want it. The beans Machado processed with techniques in use since the 18th century are still sitting in burlap sacks on the same land where they were harvested with machetes and spread in the sun with wooden rakes. Workers say some of it is starting to go bad.

Alejandro Prosperi, a spokesman for Venezuela's cacao association, said exporters have not been able to make shipments since January, and have 5,000 tons of cacao sitting in warehouses. Some smaller exporters had their licenses reinstated quickly, but larger firms remain shut down.

Agriculture Minister Jose Luis Berroteran has not explained why the government cancelled export permits, but said the administration is working to resolve the issue and would make resuming exports a priority.

The government itself sees great promise in what is now a niche industry. In 2011, the late President Hugo Chavez called cacao a strategic commodity, like oil, and pledged to convert the country into a "world cacao power."

It's not an unrealistic goal. For centuries, Venezuela was among the world's biggest cacao producers, though the industry stagnated decades ago as oil came to dominate the economy. Today the country exports just 8,000 tons a year, for revenue of about $30 million, slightly less than it earns from exporting another signature product, rum.

But connoisseurs still rhapsodize about Venezuelan beans — their complex flavor, the way they linger in the mouth, and the high and low notes they lend to the chocolate sold in places like Switzerland and Belgium.

"It is one of the most harmonious, symphonic cacaos. Even the lowliest cacao in Venezuela is fine cacao," said Maricel Presilla, the New Jersey-based author of "The New Taste of Chocolate." ''But whoever depends on cacao is in trouble there now."

While many growers complain that exports are over-regulated, others say the government has been slow to protect the crop's reputation.

Venezuela's most prized cacao comes from the tiny seaside village of Chuao, naturally irrigated by cascading rivers and accessible only by fisherman's skiff. Life there has revolved around chocolate since the sixteenth century, when pirates frequented the cove and European kings sipped drinks made with the village's beans. Today they sell for three times the price of other Venezuelan beans.

Chuao cacao is legally protected by the same system that ensures only sparkling wine from a specific region in France is entitled to the label Champagne. But the government is not issuing this certificate because it hasn't established a mechanism to verify the origin.

Venezuelan chocolatier Patrick Pineda last year took over the contract for exporting all of Chuao's chocolate, and he's created his own makeshift certificate of origin. Chocolate experts say there is still generally six times more Chuao-labeled cacao on the market than is actually being harvested each year, which depresses the price.

"Since people can just make up the fact that they have Chuao, they're not going to pay that premium," Pineda said.

Presilla, the author, has been watching all of this from the U.S. with frustration. But she said that if the cacao industry is able to right itself in Venezuela, the beans might command an even higher price.

"There might be better cacaos elsewhere, but few have the history and the genetics. And the harder it is to get it, the more people want it," she said.