More Schools Are Offering Breakfast in the Classroom

In an effort to increase the number of children eating breakfast, more schools are serving it in the classroom. A national survey by the Food Research and Action Center found that 50 of 62 districts polled offered breakfast in class or had outside carts with food items that children could bring into the classroom. 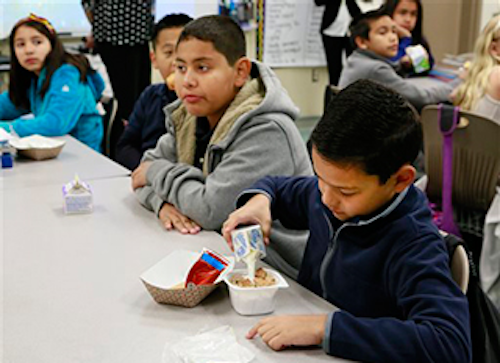 LOS ANGELES (AP) — When the school bell rings, children file into classrooms and open their textbooks. Increasingly, they're also eating a bowl of cereal.

In an effort to increase the number of children eating breakfast, more schools are serving it in the classroom.

In a national survey by the Food Research and Action Center, 50 of 62 districts polled offered breakfast in class or had outside carts with food items that children could bring into the classroom.

Yet the initiative has opponents in districts like Los Angeles Unified, where some teachers and parents argue that low-income children in danger of falling behind academically are getting less class time andfood is being thrown away.

Here are some key things to know:

The federal school breakfast program started in 1966, but for decades, participation lagged behind the number of students eating a free or reduced-price lunch. Schools that offered breakfast typically served it before school in the cafeteria. Not all children could get to school early, and of those that did, many opted to play outside.

The U.S. Department of Agriculture reimburses schools for each free or reduced price meal served to low-income students. So non-participation means losing potentially millions in revenue.

Studies haven't shown a link between eating breakfast and academic performance, but supporters say there is a common-sense element to the initiative. The day before a big test, for example, parents are routinely reminded to make sure their children eat a good breakfast.

Anecdotally, some districts report improved attendance and fewer visits to the school nurse.

Charles Basch, a professor at Columbia University's Teachers College, said school breakfast is one of several factors with an effect on a child's ability to learn.

"There's not just one thing that's going to be a magic bullet," he said.

Instead of sending children to the cafeteria, students or volunteers bring crates of food to the classroom. Each district determines what food to serve, but all meals must meet federal nutrition guidelines.

A typical meal could include a piece of fruit, cereal, milk and orange juice, coffee cake or a breakfast sandwich.

Ideally, the food can be served and eaten in 10 minutes. Teachers are encouraged to incorporate a lesson or other school tasks, such as taking attendance, while students eat. This can be a challenge, especially for teachers of younger students.

Supporters say serving breakfast to only some students adds to the stigma associated with a free meal and discourages those who need it from eating.

The number of children from low-income families has increased from 32 percent in 1989 to 51 percent in 2013, according to the Southern Education Foundation. For the most vulnerable students, the foodthey get at school might be their most substantial meal of the day.

Where breakfast is being served in class, participation is significantly higher than in schools where it's offered in the cafeteria.

Parents and teachers have objected where it's been introduced as a universal policy. Opponents say breakfast in the classroom takes away class time from low-income students who have lower math and reading performance.