Rain-Resistant Coating May Get More Cherries to Your Table

A tissue-thin, food-grade film developed at Oregon State Univ. acts like a raincoat for sweet cherries, cutting rain-related cracking of the fruit in half and potentially saving a whole season’s crop. 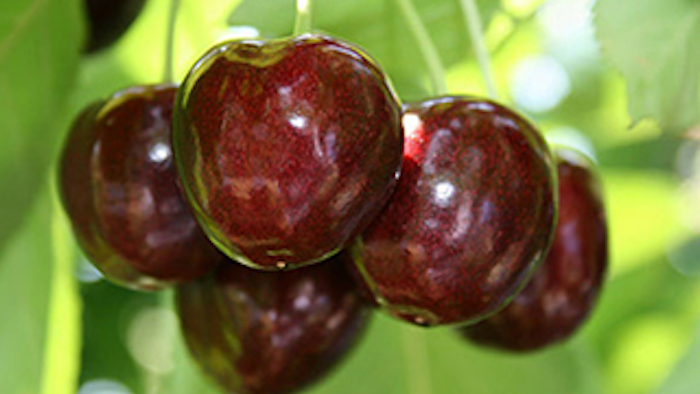 A tissue-thin, food-grade film developed at Oregon State Univ. acts like a raincoat for sweet cherries, cutting rain-related cracking of the fruit in half and potentially saving a whole season’s crop.

The stretchy spray-on biofilm, patented as SureSeal, was developed by Clive Kaiser, an OSU horticulturist and Extension tree-fruit expert, and OSU pharmacist J. Christensen. SureSeal is a proprietary mix of natural chemicals similar to those found in the outer skins of cherries and blueberries. Its main ingredients are cellulose, palm oil-based wax and calcium.

Growers spray it onto their trees twice per season in a water-based emulsion. Tiny droplets of the film cohere on the fruit and leaves, forming an edible, elastic, water-resistant bandage about 13 microns thick. The bandage stretches as the fruit grows, staying on through harvest to market and table.

Spring rainstorms – common in cherry-growing country – can crack cherries so badly they’re not worth picking, said OSU horticulturist Lynn Long. An Extension expert in tree fruits, Long conducted field trials of SureSeal in orchards in Oregon’s Wasco and Hood River counties from 2008 through 2014 and helped develop the final commercial formulation.

His field testing in 2007-08 showed that rainfall in late June and early July caused between 10 percent and 27 percent of cherries to crack. Spraying with the biofilm reduced the rate of cracking by at least 50 percent, and more in some cases.

Damage to cherries can vary widely from season to season, depending on how much it rains at critical points in the ripening.

“If rain damage exceeds 25 percent of the crop, you can’t harvest; the economics don’t support it,” said Long. “But if you can reduce cracking to 12 percent, you’ve got a chance to salvage a crop that would otherwise have been lost. That’s pretty significant.”

Norway’s climate, said Long, may explain why results there were less dramatic than in Oregon: cherries will also crack when soils get saturated and water gets drawn into the fruit from inside. “Nothing you spray on a tree,” he said, “can protect cherries against that.”

In Norway, fruit cracking was reduced to 10 percent when the biofilm treatment was combined with plastic ground covers that drew rainwater away from trees’ roots.

Christensen holds a patent on a similar film-like coating that he invented to enable pulse-release dosages of oral medications. Kaiser had worked on food-grade biofilms in his native South Africa before coming to OSU in 2006.

“When I learned about Mark’s work,” said Kaiser, “I wandered over to (the College of) Pharmacy and asked him if we might produce a hydrophobic film for cherry trees. He said he thought we could give it a go.”

The product is completely safe to eat, said Christensen. Each ingredient is either on the Food and Drug Administration’s “generally recognized as safe” (GRAS) list or the Environmental Protection Agency’s list of inert ingredients in registered pesticides.

He added that a 2013 trial in Washington found that SureSeal-sprayed fruit had higher residual levels of some insecticides and fungicides. However, these levels did not exceed the thresholds set by the EPA for U.S.-produced cherries, and the study concluded there was no additional risk to human health.

Funds for the initial research that led to SureSeal came from a company that ultimately chose not to commercialize the product, said Berry Treat, director of OSU’s Office of Commercialization and Corporate Development. The university licensed the SureSeal technology to another company, Nevada-based Cultiva LLC, in 2013.

Cultiva manufactures SureSeal-based products and markets them under its own trade names. In 2014, the company released a formulation for blueberries, and is now working on a third for apples. The inventors and OSU share a 5 percent royalty on all revenue derived from SureSeal technology.

Parka, Cultiva’s product for cherries, is now in its third commercial season. The two recommended spring applications cost growers about $75 per acre each. Long estimated that the product could save $16,500 worth of cherries per acre in a rainy Oregon spring.

Cultiva expects to sell 29,000 gallons of product to about 300 cherry and blueberry growers in Oregon, Washington, British Columbia and Georgia, said Sean Musser, the company’s vice president for business development. SureSeal-based products are also being marketed in Canada, Chile and Australia.