Cross contamination in commercial processing facilities that prepare spinach and other leafy greens for the market can make people sick. But researchers are reporting a new method that could eliminate or reduce such incidences. 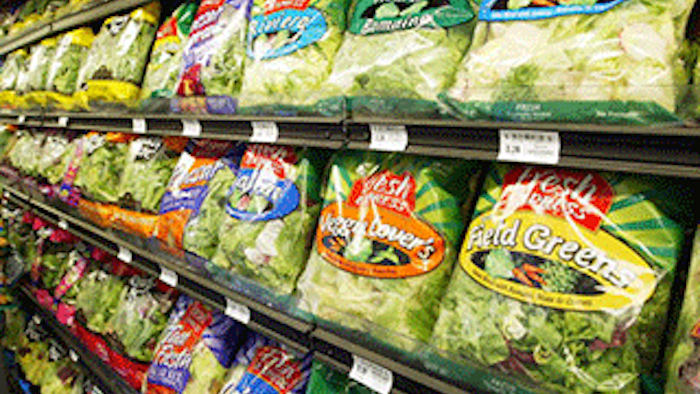 (BOSTON) — Cross contamination in commercial processing facilities that prepare spinach and other leafy greens for the market can make people sick. But researchers are reporting a new, easy-to-implement method that could eliminate or reduce such incidences.

The scientists will present their work at the 250th National Meeting & Exposition of the American Chemical Society (ACS), the world's largest scientific society. The meeting features more than 9,000 reports on new advances in science and other topics. It is being held here through Thursday.

Each year 48 million Americans get sick; 128,000 are hospitalized; and 3,000 die of food poisoning, according to the U.S. Centers for Disease Control and Prevention. And spinach or other leafy salad greens were responsible for 18 food-poisoning outbreaks over the last decade.

Greens are washed by commercial processes before they head to the grocery store. But these methods, which can include water and bleach rinses or irradiation, are not completely effective, says Nichola Kinsinger, Ph.D. She says scientists have estimated that 99 percent of food-borne illnesses from leafy greens can be traced back to disinfection issues. As a result, they have searched for and developed a different approach to attacking the bacteria, most notably E. coli, which is the cause of many outbreaks.

"Despite current disinfection rinsing, bacteria are surviving on the leaf and causing cross contamination, resulting in the numerous outbreaks we hear about in the media," Kinsinger says. She is a postdoc in the lab of Sharon Walker, Ph.D., at the University of California, Riverside. "Pathogens can come from irrigation waters or from water used during processing, and they can adhere to spinach leaves. If these bacteria are not all killed in the disinfection process, they can continue to live, grow, spread and contaminate other surfaces within the facility and other leaves."

Using a parallel-plate flow chamber system that Walker developed, the researchers tested the real-time attachment and detachment of bacteria to the outer layer of spinach leaves. At low bleach concentrations, the bacteria fell off the leaves, but remained alive. At the higher concentrations used commercially, however, all of the bacteria were killed. "This result was perplexing," Walker says. "Our experiments were telling us that commercial bleach rinses should be much more effective than they are. But then we studied the leaf itself in more detail."

A spinach leaf is not perfectly smooth, she notes. So, the team modeled how the bleach would move across the surface of a spinach leaf, taking its bumps and grooves into account. Surprisingly, the model revealed that the concentrations of bleach on leaves may not be consistent.

"We found that because of the topology of the spinach leaf, nearly 15 percent of the surface may 'see' a bleach concentration that is 1,000-times less than that of the rinse solution," Kinsinger says. In some cases, that translated to a 90 percent bacterial survival in their tests -- and a high risk for cross contamination.

To reduce that risk, the researchers are optimizing an inexpensive titanium dioxide (TiO2) photocatalyst that companies could add to the rinse water or use to coat equipment surfaces that come into contact with the leaves as they are processed. When TiO2 absorbs light, it produces a strong oxidant that kills bacteria.

The scientists now plan to conduct more studies on the photocatalyst, and they will look at a broader range of foods, engineered surfaces and pathogens.