New Hampshire Oyster Project: Cooperation on the Half Shell

A major effort is underway along the East Coast to restore the natural oyster population, which has plummeted in recent decades due to disease, over-harvesting and other problems. 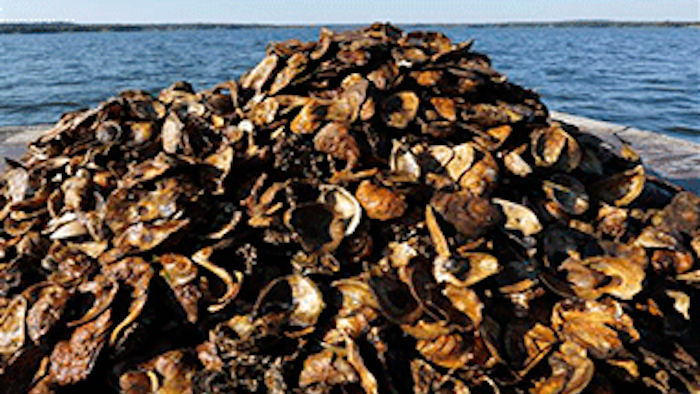 DURHAM, N.H. (AP) — From seeding to slurping, what gets served on the half shell is not even half the story when it comes to New Hampshire oysters.

A major effort is underway here and elsewhere along the East Coast to restore the natural oyster population, which has plummeted in recent decades due to disease, over-harvesting and other problems. Led by the University of New Hampshire, the project brings together numerous partners ranging from restaurants that recycle discarded oyster shells to volunteer "foster parents" who raise baby oysters until they're big enough to survive on their own.

"We had this one shell that had four nice oysters on it. Each time we'd pull them up, we'd go, 'Oh, there he is! There's our star!'" said Lynn Badger of Newmarket, who like any good grandma keeps pictures of her baby oysters on her phone. "So it's kind of fun to see them, even though it's really hard to discern one from another."

Badger and her husband are part of a complicated process that starts with constructing new reefs out of clamshells and other material from a seafood processing plant in Rhode Island. Microscopic oyster larvae are purchased from Maine and placed in special tanks at UNH's Jackson Estuarine Lab, where the spat — young oysters — attach themselves to shells discarded from area restaurants.

Some of them are then turned over to dozens of volunteer conservationists like Badger, who keep them in cages tied to their docks and raise them until they're about an inch long. Once they're big enough to be safe from crabs and other predators, the oysters are collected and taken to the reefs.

"We manipulate nature and try to make the conditions better for the oysters," said UNH research professor Ray Grizzle.

As recently as the 1980s, New Hampshire's oyster reefs produced "monster" oysters the size of dinner plates, Grizzle said. The population has dropped 90 percent since then, and the average lifespan has shrunk from 10 to 20 years to three to five years.

That's bad news for more than just foodies: In addition to being a delicacy, oysters provide significant water quality benefits, each filtering about 20 gallons of water per day, and the reefs they grow on provide habitat for fish and other species.

In New Jersey, where the American Littoral Society is using similar recycling and restoration methods to re-establish an oyster colony near Berkeley Township, there's an added benefit. Oyster beds can act as "speed bumps," blunting the impact of waves and storm surges like those that battered the state during Superstorm Sandy.

In New Hampshire, UNH has added more than 18 acres of oyster reefs and more than 3 million oysters to the ecosystem in the last six years, working with partners such as the Nature Conservancy, oyster farmers and restaurants.

Michael Landgarten, owner of Robert's Maine Grill in Kittery, Maine, said it was an easy decision to join the recycling program. While it took his staff some time to get used to separating oyster shells from other waste, he said the benefits of helping restore the oyster population far outweigh any minor inconvenience.

"Recycling the oyster shells is such a no-brainer. It feels great," he said. "There are other things that we do that take much more effort — more effort to put in solar, more effort to compost — those things are trickier. This thing is such a win-win."

Badger and the other volunteers not only raise public awareness about oysters, they're providing researchers with valuable information, Grizzle said. For example, naturally spawned oysters found their way to some of the shells Badger received this summer.

"We're getting data from 80 different sites that we would never be able to monitor on growth, mortality and natural settlement on the shells they suspend from their docks," Grizzle said.

Beyond the New Hampshire project, researchers are working to develop disease-resistant oyster strains and to identify areas where oysters have evolved to naturally resist pathogens, he said. Others are working to better quantify the value of the water filtration and other ecosystem services oysters provide. Funding remains a challenge, he said, particularly for long-term monitoring.

"The typical project is funded for two years, but we need to look five to 10 years down the road to really understand what works and what doesn't," he said. "I don't think any of us want to keep putting money into processes and projects that fail."

Back at Robert's Maine Grill, Landgarten says his staff educates customers about the oyster project, but that's not what draws them in.