CDC Study: Toddler Food Often has too much Salt, Sugar

About seven in 10 toddler dinners studied contained too much salt, and most cereal bars, breakfast pastries and snacks for infants and toddlers contained extra sugars, according to the study by researchers at the federal Centers for Disease Control and Prevention. They advise parents to read food labels carefully and select healthier choices. 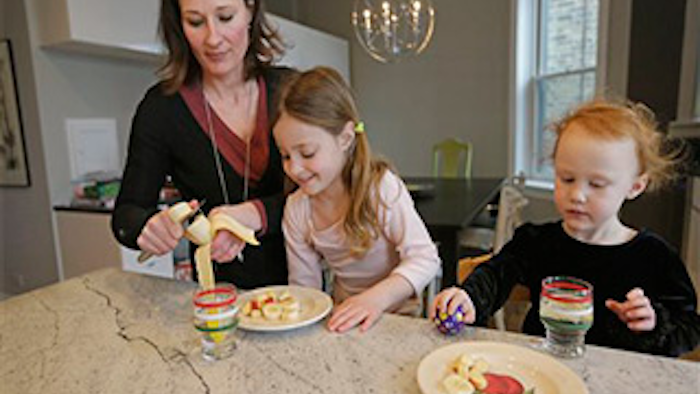 CHICAGO (AP) — Many packaged meals and snacks for toddlers contain worrisome amounts of salt and sugar, potentially creating an early taste for foods that may contribute to obesity and other health risks, according to a new government study.

About seven in 10 toddler dinners studied contained too much salt, and most cereal bars, breakfast pastries and snacks for infants and toddlers contained extra sugars, according to the study by researchers at the federal Centers for Disease Control and Prevention. They advise parents to read food labels carefully and select healthier choices.

The researchers analyzed package information and labels for more than 1,000 foods marketed for infants and toddlers. Results appear in the journal Pediatrics on Monday.

The study notes that almost one in four U.S. children ages 2 to 5 are overweight or obese — and that almost 80 percent of kids ages 1 to 3 exceed the recommended maximum level of daily salt, which is 1,500 milligrams. Excess sugar and salt can contribute to obesity and elevated blood pressure even in childhood, but also later on.

"We also know that about one in nine children have blood pressure above the normal range for their age, and that sodium, excess sodium, is related to increased blood pressure," said the CDC's Mary Cogswell, the study's lead author. "Blood pressure tracks from when children are young up through adolescence into when they're adults. Eating foods which are high in sodium can set a child up for high blood pressure and later on for cardiovascular disease."

The Grocery Manufacturers of America, a trade group whose members include makers of foods for infants and toddlers, issued a statement saying the study "does not accurately reflect the wide range of healthy choices available in today's marketplace ... because it is based on 2012 data that does not reflect new products with reduced sodium levels."

The study "could needlessly alarm and confuse busy parents as they strive to develop suitable meal options that their children will enjoy," the group said.

The researchers said theirs is the most recent, comprehensive data on commercial foods for young children. Cogswell acknowledged there have been some improvements in the marketplace and said the findings aren't all negative.

Also, about one in three toddler dinners and most toddler cereal bars and dried fruit-based snacks contained at least one added sugar.

Kathleen Burnett of Chicago said she tries to buy healthy foods for her three young daughters and recently switched brands when she found out her favorite kids' yogurt was full of sugar.

"When you're in the grocery store and things seem quick and simple, it's very tempting to take those things, and we certainly have," Burnett said. "We just try to use moderation in those prepackaged foods."