Frito-lay announces cappuccino-flavored chips for its Lay's brand beginning in late July. The coffee-flavored chips are part of the four finalists of its second annual "Do Us a Flavor" contest in the U.S., which allows people to create a new potato chip. 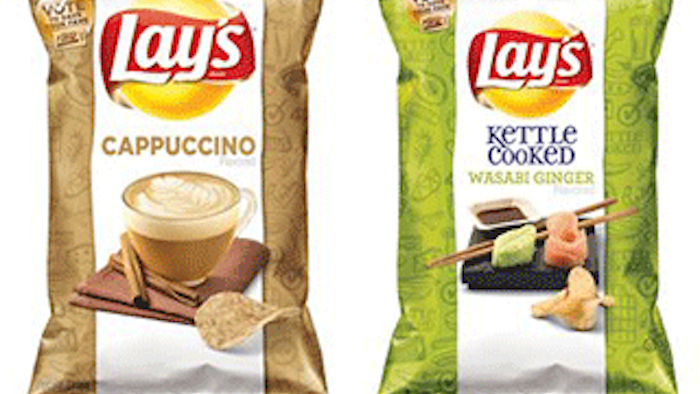 NEW YORK (AP) — American palates have changed considerably over the years, but is the country ready for cappuccino-flavored Lay's?

Frito-Lay, the snack division of PepsiCo Inc., will announce on Wednesday the coffee-flavored chips as one of the four finalists for its second annual "Do Us a Flavor" contest in the U.S., which gives people a chance to create a new potato chip that is sold nationally and win $1 million. The other three finalists are Cheddar Bacon Mac & Cheese, Mango Salsa and Wasabi Ginger.

Frito-Lay says the four flavors are expected to start hitting shelves in late July. People will then be able to vote online for their favorite through Oct. 18.

The promotional stunt is intended to boost customer engagement online and send fans to stores in search of the flavors.

But it also reflects how Frito-Lay is trying to keep up with changing tastes, with its ever-evolving lineup of potato chips now including several Hispanic flavors. Later this month, it also plans to roll out Lay's Stax chips in a Korean barbecue flavor and Lay's Stax in Thai Sweet Chili flavor.

That would make them the first Asian flavors of Lay's chips sold nationally in the U.S., not counting the flavors it has introduced as part of the "Do Us a Flavor" contest. Last year, Cheesy Garlic Bread beat out Chicken & Waffles and Sriracha, a sauce commonly used in Thai cuisine.

Frito-Lay notes that its cappuccino flavor doesn't contain any actual coffee or caffeine. The company last year discontinued a variety of Cracker Jack that contained caffeine after the Food and Drug Administration said it was concerned about the proliferation of caffeinated food and drinks. Frito-Lay says it halted production because of weak demand, rather than regulatory concerns.