Taco Bell will begin airing a TV spot set to the tune of "Old MacDonald Had a Farm" that shows a man who has been eating Egg McMuffins since 1984. After trying Taco Bell's breakfast, the man trims his mullet, switches to tighter pants, gets a smartphone and takes down his "Loverboy" poster. 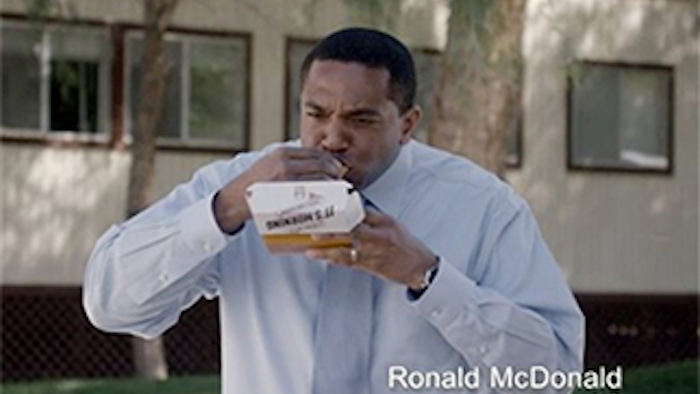 NEW YORK (AP) — Taco Bell is taking another jab at McDonald's in a new ad for its breakfast menu.

The fast-food chain will begin airing a TV spot that is set to the tune of "Old MacDonald Had a Farm" and shows a man who has been eating Egg McMuffins since 1984. After trying Taco Bell's breakfast, the man trims his mullet, switches to tighter pants, gets a smartphone and takes down his "Loverboy" poster.

It's a follow up to another ad that featured real-life men named Ronald McDonald professing their love of Taco Bell's breakfast (notably, the men were paid to appear in those spots). If Taco Bell seems fixated with McDonald's, it's with good reason; McDonald's has long been the heavyweight in the fast-food breakfast category with 31 percent of the market, according to food industry researcher Technomic.

Whether the strategy of going after the No. 1 player so directly translates to sustained sales is yet to be seen. McDonald's breakfast has been hugely popular since it rolled out the Egg McMuffin in the early 1970s, and getting people to think of Taco Bell as a place to get breakfast won't be easy. Wendy's, for instance, has retreated from plans to expand its breakfast menu after testing the offering in select locations.

"We knew we had to have a disruptive marketing campaign," said Chris Brandt, Taco Bell's chief marketing officer, in a phone interview.

Taco Bell's breakfast menu is also fairly limited compared with McDonald's, which now includes oatmeal and the option to substitute egg whites in breakfast sandwiches. But Brandt said the company has additional offerings in development.

"Some of the things on our menu might run out of gas," he also noted.

When asked to specify which items he was referencing, Brandt declined to elaborate. But there are only four main attractions on the menu — the A.M. Crunchwrap, a breakfast burrito, a grilled taco and the waffle taco. Reviews for the last item have been mixed. The website Gothamist, for instance, declared them "really meh."

"I wouldn't give up on the waffle taco," Taco Bell's Brandt stressed.

In the meantime, McDonald's is firing a few volleys in response to the teasing from Taco Bell. The day after the first Taco Bell ad, it tweeted an image of its spokesclown kneeling down to pet a Chihuahua with the words, "Imitation is the sincerest form of flattery."

The image, a reference to Taco Bell's retired mascot, got nearly 3,000 retweets.

The two chains aren't alone in trying to capitalize on the growing breakfast category. Starbucks also revamped its breakfast sandwiches in hopes of driving up sales. And the CEO of Sonic recently said on CNBC that convenience stores are posing greater competition with stepped-up breakfast offerings.