Across much of farm country, a dispute over a common weed killer is turning neighbor against neighbor. The furor surrounding the herbicide known as dicamba has quickly become the biggest controversy of its kind in U.S. agriculture. 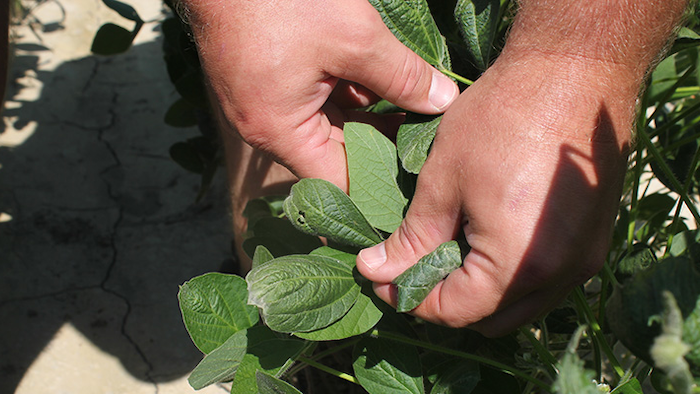 In this Tuesday, July 11, 2017, photo, East Arkansas farmer Reed Storey shows the damage to one of his soybean plants in Marvell, Ark. Storey said half of his soybean crop has shown damage from dicamba, an herbicide that has drifted onto unprotected fields and spawned hundreds of complaints from farmers. The complaints prompted Arkansas and Missouri to temporarily ban the herbicide. (AP Photo/Andrew DeMillo)

LITTLE ROCK, Ark. (AP) — A longtime Arkansas soybean farmer, Mike Wallace thought of his neighbors as a community and always was willing to lend a hand if they faced any hardships with their crops.

"Mike would do anything for any farmer," his wife, Karen, said. "If there was a farmer who got sick in harvest time or planting time or whatever, he would say, 'What can I do to help? Here's my equipment. Here's my guys. Let's go do it.'"

But across much of farm country, a dispute over a common weed killer is turning neighbor against neighbor. The furor surrounding the herbicide known as dicamba has quickly become the biggest controversy of its kind in U.S. agriculture, and it is even suspected as a factor in Wallace's death in October, when he was allegedly shot by a worker from a nearby farm where the chemical had been sprayed.

Concern about the herbicide drifting onto unprotected crops, especially soybeans, has spawned lawsuits and prompted Arkansas and Missouri to impose temporary bans on dicamba. Losses blamed on accidental chemical damage could climb into the tens of millions of dollars, if not higher, and may have a ripple effect on other products that rely on soybeans, including chicken.

Dicamba has been around for decades, but problems arose over the past couple of years as farmers began to use it on soybean and cotton fields where they planted new seeds engineered to be resistant to the herbicide. Because it can easily evaporate after being applied, the chemical sometimes settles onto neighboring fields. Some farmers illegally sprayed dicamba before federal regulators approved versions that were designed to be less volatile.

The chemical "has made good neighbors look like bad neighbors," said Reed Storey, an Arkansas farmer who says about half of his soybean crop has shown damage from drifting dicamba.

As the herbicide was put into broader use, complaints began pouring in from farmers in Arkansas and other states. Crops near many dicamba-treated soybean fields turned up with leaves that were cupped and crinkled. The Plant Board has received more than 630 complaints about dicamba so far this year, many more than the 250 or so total complaints normally received in a full year. Complaints have also been registered in Missouri, Mississippi and Tennessee.

The issue illustrates the struggle to control agricultural pests as they gradually mutate to render the chemicals used against them less effective. And while some farmers fear damage from their neighbors' dicamba, others are worried that their fields will be defenseless against weeds without it.

The drifting herbicide has been particularly damaging for soybeans. A group of farmers in Arkansas filed a class-action lawsuit in federal court against BASF and Monsanto, which make dicamba.

The chemical has hurt other crops too, including vegetables and peanuts. As the damage piles up, dicamba has also made it more difficult for one company, Ozark Mountain Poultry, to find non-genetically modified soybeans to use as feed for chickens because more farmers are relying on seeds engineered by Monsanto to resist the herbicide. Non-modified soybeans are needed to market chicken as non-GMO.

Dicamba's makers insist the problem is not with the herbicide but how some farmers apply it. They say the states should focus on other restrictions, such as limiting spraying to daytime hours.

"It is premature at this point to conclude that it is a fault of the product," Dan Westberg of BASF told lawmakers this month.

Farmers say the herbicide is desperately needed to kill pigweed, which can grow and spread seeds rapidly, threatening a soybean farmer's yield.

"We cannot lose this technology," Perry Galloway, an Arkansas farmer who has used dicamba and dicamba-tolerant soybean seeds. "We've come too far at this point to just throw it away."

It's not clear what states will do about the herbicide after this year. Missouri lifted its sale-and-use ban for three dicamba herbicides after approving new labels and restrictions for its use. The ban on other dicamba products will be in effect until Dec. 1. Arkansas' ban expires in November. Gov. Asa Hutchinson has said a task force needs to study the issue further.

"This debate will continue into future planting seasons, and Arkansas needs a long-term solution," he wrote in a letter last month to state agriculture officials.

Wallace's relatives said they are glad the herbicide will be banned for the time being in Arkansas. For them, too much damage has already been done.

Farm worker Allan Curtis Jones, 27, is accused of shooting Wallace, 55, in a confrontation over dicamba, which Wallace believed had drifted from the farm where Jones worked to damage his soybean crop.

Jones told authorities that Wallace called him to talk about the spraying. Jones brought his cousin with him as a witness because he believed Wallace wanted to fight, the Arkansas Democrat-Gazette reported in October.

When the two men met, Jones told police, Wallace grabbed him by the arm. Jones said he pulled a handgun from his pocket and fired "until the gun was empty," Mississippi County Sheriff Dale Cook told the paper. He is set to go on trial this fall.