Is your mac and cheese really a stew of dangerous toxins?! It might be! 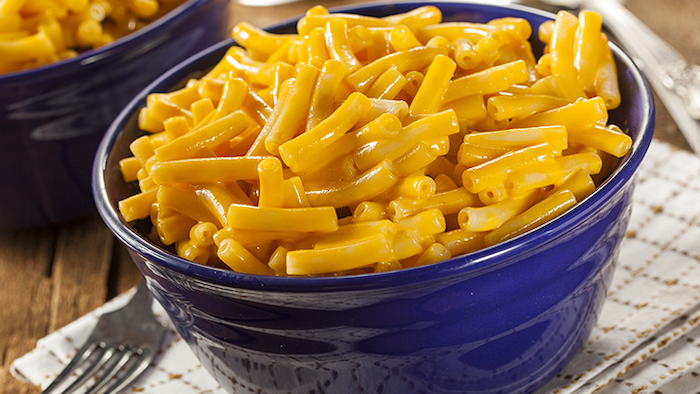 Is your mac and cheese really a stew of dangerous toxins?! It might be!

At least that’s the alarmist summary of a recent New York Times article called “The Chemicals in Your Mac and Cheese” that I assume many horrified parents read while simultaneously slapping forks full of noodles away from their kids’ mouths.

The reporting goes like this: Phthalates are thought to be endocrine disruptors that have been linked to all kinds of ghastly health problems, including genital birth defects and neurological issues.

Phthalates, which are often used to soften plastics or as a solvent, have been banned in the U.S. in many children’s products and are also being phased out by a slew of manufacturers. But the class of chemicals have been shown to leach into foods through packaging and the manufacturing process. They especially love to congregate in fatty foods.

So a study tested 30 varieties of macaroni and cheese and — stomach lurch — found phthalates present in almost every one.

That’s bad, right? Well, unfortunately the NYT doesn’t go the extra step of giving readers a sound scientific grasp of the issue. It fails to adequately answer a simple but critical journalistic question: So what?

Leaving aside the fact that the “study” was conducted by an independent lab and published by KleanUpKraft.org, (not exactly a peer-reviewed source), the article leaves out a meaningful discussion of the true concerns in toxicology: the potency, the dose and the frequency of exposure. Instead of offering empirical data (the online article links to the study instead), the NYT sums it all up by saying that phthalates were detected in the mac and cheese in “high levels.”

This may be good enough to kickstart a lengthy comments’ section discussion about the efficacy of the FDA, or if life is even worth living when you can’t eat mac and cheese, but it doesn’t help consumers understand the true risks that may be lurking at the grocery store.

It’s long been known that dairy is a good carrier of phthalates. But phthalates are one of the most widely used chemicals and we are also exposed to them through a broad range of everyday products — including other foods, and even through the air. So, denying your kids their favorite boxed dinner isn’t going to suddenly save them from phthalate exposure.

Phthalates are in fact so ubiquitous that even the labs where they are tested can contaminate the results.

“To properly interpret the data collected, it would be helpful to make the data available in the format of a peer-reviewed publication that also would show the quality control and quality assurance protocols to determine the presence of background contamination,” Rolf Halden, a professor and director of the Biodesign Center for Environmental Security and the Biodesign Institute at Arizona State University, told me.

Phthalates also break down quickly in the body. According to one study: “Once incorporated into the human body, phthalates are short-lived and rapidly metabolized with half-lives on the order of hours to several days.”

Even more to the point: How much phthalate cheese is too much?

According to one doctor who reviewed the study for Good Morning America, the levels shown in the NYT-published study — on average 516 parts per billion — are actually “extremely low,” when looked at from a health perspective

“Personally, I would be more worried about getting into a car accident,” she said.

Where My Regulators At?

None of this is to say that studying the effects of phthalates isn’t a worthy pursuit. If anything, studies like this only heighten the need to better understand the risks of chemicals in our everyday lives.

But it’s important to keep some big-picture perspective on the issue.

“While this report is helpful in assessing one of many potential or known sources of human exposure to phthalates, consumers may want to take a level-headed view of the results,” Halden said. “There likely are many more potent sources of phthalate exposure in our society than mac and cheese, and it will require an effort by consumers, industry and regulatory agencies to reduce these unwanted exposure sources as much as possible.”

In fact, the FDA is currently considering a ban of several phthalates in food and food packaging, at the behest of a consortium of NGOs.

The American Chemistry Council commented, however, that after reviewing the available research on phthalates they were confident the agency would maintain the status quo.

“[Phthalates] have been reviewed and studied by numerous government scientific agencies and regulatory bodies worldwide. Their conclusions have been essentially the same each time: that the phthalates in the marketplace today do not pose a risk to human health at typical real-life exposure levels,” the ACC stated.