Two University of Maine scientists and a former graduate student believe they may have found a solution to the state's trouble with invasive green crabs, and it involves turning the clawed critters into savory pastries. 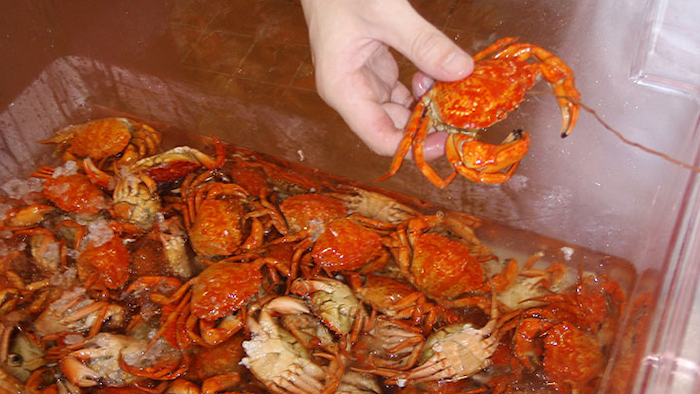 In this February 2010 photo provided by food scientist Joseph Galetti, he holds a fully cooked green crab with a thermocouple stuck in its eye in Orono, Maine. Galetti was part of a team of University of Maine researchers who worked to turn the invasive crabs into a food product that would give fishermen an incentive to catch them. (Joseph Galetti/Denise Skonberg via AP)

ORONO, Maine (AP) — The unwanted crabs that have plagued Maine's clam beds for years might soon play a new role — as appetizer.

Two University of Maine scientists and a former graduate student believe they may have found a solution to the state's trouble with invasive green crabs, and it involves turning the clawed critters into savory pastries.

The green crabs threaten Maine's environment and economy because they're ravenous predators of softshell clams, one of the state's signature seafood items. State officials have said the crabs, which are native to Europe, have increased in numbers in recent years as water temperatures off Maine rise.

Fishermen and state fishery managers have long struggled to find ways to control the population by making the crabs, which net fishermen less than a dollar per pound, worth catching. Now, three food scientists say they've happened upon a food product that might just be viable: green crab empanadas.

"I chose the green crab specifically because it was local; it was a project affecting the state of Maine," said Joseph Galetti, one of the scientists involved. "So by creating a value-added food product that people will enjoy, we can stimulate a green crab fishery."

And it's not just pie in the sky. Galetti and his colleagues have served up samples to taste testers and published findings this year in the Journal of Aquatic Food Product Technology stating that about two-thirds of testers would "probably" or "definitely" buy the product if it were locally available.

The project was a collaboration between Galetti, who is now a food scientist in New Hampshire, and UMaine food scientists Beth Calder and Denise Skonberg. Calder and Skonberg had been looking to create some kind of value-added product involving green crabs and recruited Galetti to work on the project when he was a graduate student because he has a background in the culinary arts.

The empanada is a fried pastry that mixes minced green crab meat with onions, corn, cayenne pepper and thyme. The scientists say they hope the recent publication of their study will drive interest among food companies in making the product commercially. The university is promoting the findings in the hopes of getting fishermen interested in catching green crabs and chefs interested in cooking with the critters.

The study states that the 87-person panel of taste testers rated the empanada between "like slightly" and "like moderately," which the scientists describe as pretty impressive for food made out of an invasive pest.

The crabs first became noticeable in Maine around the turn of the 20th century and are infamous for the damage they can do to coastal habitats like eelgrass beds and salt marshes. They are the subject of a small fishery in Europe, but the small crabs lack popularity as food because they contain little meat.

Skonberg said one of the reasons it's important to find a commercial use for them is their resilience. They can survive freezing weather, they are resistant to some chemicals used to kill sea pests, and each female can produce hundreds of thousands of offspring.

All the better reason to give people an incentive to eat them, Skonberg said.

"They are hard to kill, and with the reproductive rate and the water warming, they are doing incredibly well," Skonberg said. "If we don't have any use for them at all, it's hard."