Amazon is buying Whole Foods in a deal valued at about $13.7 billion, a stunning move into brick-and-mortar retail that sets the stage for more radical store experimentation and intensified competition with grocery rivals. 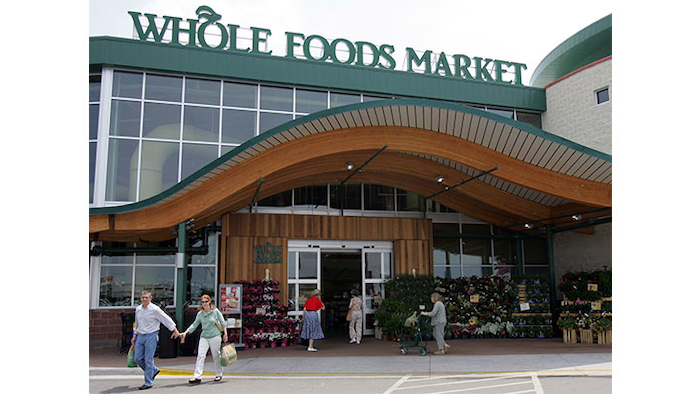 FILE - In this May 9, 2007 file photo, customers are seen outside a Whole Foods Market in Dallas. Online juggernaut Amazon announced Friday, June 16, 2017, that it is buying Whole Foods in a deal valued at about $13.7 billion, including debt. Amazon.com Inc. will pay $42 per share of Whole Foods Market Inc. AP Photo/LM Otero

NEW YORK (AP) — Amazon is buying Whole Foods in a deal valued at about $13.7 billion, a stunning move into brick-and-mortar retail that sets the stage for more radical store experimentation and intensified competition with grocery rivals.

The deal unites the online juggernaut with the grocery store chain that fell behind as the organic and natural foods it helped popularize expanded to more locations and shoppers found "good enough" alternatives.

The deal has the possibility to be "transformative," Moody's lead retail analyst Charlie O'Shea said in a note, "not just for food retail, but for retail in general."

The "implications ripple far beyond the food segment, where dominant players like Walmart, Kroger, Costco, and Target now have to look over their shoulders at the Amazon train coming down the tracks," O'Shea said.

Online delivery of groceries so far has been tough for any company to pull off because of customers' concerns about the quality of meat and produce, Wedbush Securities analyst Michael Pachter said. But if customers know that what they are getting is the same as what they'd get at the local store, they are more likely to try it out.

He said that even if Amazon gets 20 million members of its Prime loyalty program to pay $15 a month extra for AmazonFresh grocery-delivery service, that's 20 million not going to traditional supermarkets. He added that these are likely the higher-income households who tend to buy more expensive brands and cuts of meat.

"The conventional grocery store should feel threatened and incapable of responding," Pachter said.

And because customers can buy foods and bulk items like toilet paper from a single retailer, discount retailers such as Costco, Target and Walmart should feel threatened, too.

The deal comes a month after Whole Foods announced a board shake-up and cost-cutting plan amid falling sales and pressure from activist investor Jana Partners. It also had been facing increased pressure from rivals offering more organic options.

As sales have slumped, Whole Foods executives have tried to highlight what distinguishes it from rivals. And the company has launched an offshoot chain named after its "365" private label brand, a nod to the popularity of no-frills chains that draw shoppers with low prices.

But in February, Whole Foods said it no longer saw the potential for expanding its flagship chain to 1,200 locations, up from about 460 in the United States, Canada and the United Kingdom.

Amazon, meanwhile, has been expanding its reach in goods, services, and entertainment.

It's also been testing automation technology at a Seattle convenience store that's currently open only to Amazon employees. The store uses sensors to track items as shoppers put them into baskets or return them to the shelf. The shopper's Amazon account gets automatically charged.

Amazon could cut costs if the technology gets good enough to deploy at Whole Foods locations. Whole Foods will keep operating stores under its name.

Whole Foods, founded in 1978, has struggled to differentiate itself as competitors and has cited pressure from restaurant chains, meal-delivery companies and traditional supermarkets. Its stock peaked in 2013 at $65.24. And the key measure that retailers look at to gauge their health, revenue at stores open more than a year, has fallen for seven quarters in a row.

That's frustrated investors saddled with a drop of nearly 43 percent from the start of 2014 through Thursday, while the rest of the stock market marched 32 percent higher to record heights. The investment firm Jana Partners said in April that it had built up an ownership stake in Whole Foods because it saw ways to address its "chronic underperformance for shareholders." Jana had pushed to shake up Whole Foods' board of directors, among other changes.

Pressure from activist investors got so high that Whole Foods CEO John Mackey told Texas Monthly magazine recently that "they're greedy bastards, and they're putting a bunch of propaganda out there, trying to destroy my reputation and the reputation of Whole Foods, because it's in their self-interest to do so."

Mackey will stay as CEO, and the headquarters will stay in Austin, Texas. The deal is expected to close later this year.