KIGALI, Rwanda (AP) — Environmental groups early Saturday said nations have reached a deal to limit the use of greenhouse gases far more powerful than carbon dioxide as part of efforts to fight climate change. At issue are hydrofluorocarbons, or HFCs, which are used in air conditioners and... 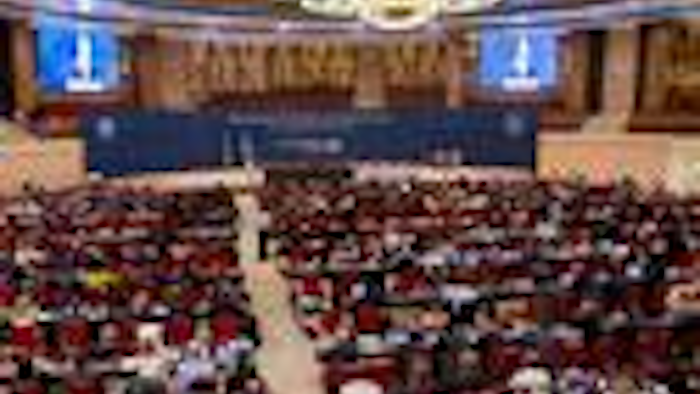 At issue are hydrofluorocarbons, or HFCs, which are used in air conditioners and refrigerators and have been described as the world's fastest-growing climate pollutants.

Observers said a small group of countries including India, Pakistan and some Middle East states pushed for and secured a later start in 2028, arguing that their economies need more time to grow. That's three years earlier than India, the world's third worst polluter, had first proposed.

Scientists have said an agreement could put a half-degree Celsius dent in global warming by the end of the century.

"Compromises had to be made, but 85 percent of developing countries have committed to the early schedule starting 2024, which is a very significant achievement," Clare Perry, UK Climate Campaign Leader with the Environmental Investigation Agency, said in a statement.

Environmental groups called this meeting the first real test of global will after the historic Paris Agreement to cut carbon emissions was reached last year.

The new agreement is "equal to stopping the entire world's fossil-fuel CO2 emissions for more than two years," David Doniger, climate and clean air program director with the Natural Resources Defense Council, said in a statement.

Experts said they hope that market forces will help speed up the limits agreed to in the deal.

HFCs were introduced in the 1980s as a substitute for ozone-depleting gases. But their danger has grown as air conditioner and refrigerator sales have soared in emerging economies like China and India. HFCs are also found in inhalers and insulating foams.

Major economies have debated how fast to phase out HFCs. The United States, whose delegation was led by Secretary of State John Kerry, and Western countries want quick action. Nations such as India want to give their industries more time to adjust.

Small island states and many African countries had pushed for quick action, saying they face the biggest threat from climate change.

"It may not be entirely what the islands wanted, but it is a good deal," the minister-in-assistance to the president of the Marshall Islands, Mattlan Zackhras, said in a statement. "We all know we must go further, and we will go further."

HFCs are less plentiful than carbon dioxide, but Kerry said last month that they currently emit as much pollution as 300 coal-fired power plants each year. That amount will rise significantly over the coming decades as air conditioning units and refrigerators reach hundreds of millions of new people.

HFCs don't harm the ozone layer like chlorofluorocarbons and similar gases that were eliminated under the 1987 Montreal Protocol. The entire world ratified that agreement, helping to repair holes in the ozone that helps shield the planet from the harmful rays of the sun. The aim of this meeting was to attach an amendment to that treaty dealing specifically with HFCs.