PAMBALA LAGOON, Sri Lanka (AP) — Sri Lanka's government and environmentalists are working to protect tens of thousands of acres of mangrove forests — the seawater-tolerant trees that help protect and build landmasses, absorb carbon from the environment and reduce the impact of natural disasters... 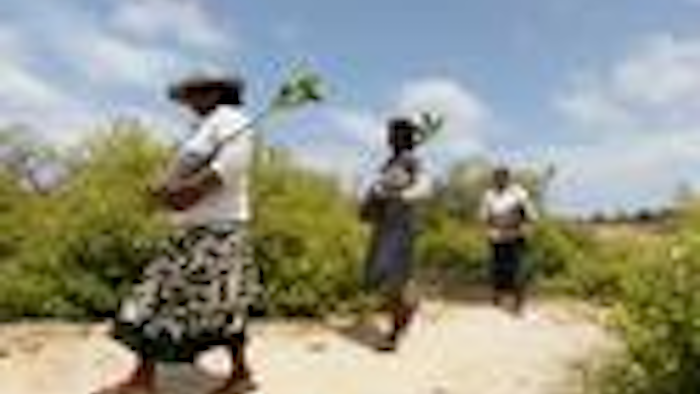 PAMBALA LAGOON, Sri Lanka (AP) — Sri Lanka's government and environmentalists are working to protect tens of thousands of acres of mangrove forests — the seawater-tolerant trees that help protect and build landmasses, absorb carbon from the environment and reduce the impact of natural disasters like tsunamis.

All 37,000 acres (15,000 hectares) of mangrove forests in Sri Lanka are now earmarked for preservation.

Researchers say at least 6,000 acres (2,428 hectares) were previously destroyed, mostly in the last 25 years. Mangroves were cleared to make room for shrimp farming, to produce salt or to make firewood. Government forces destroyed forests during the country's nearly 26-year civil war, which raged until 2009, because rebel fighters used them as hideouts.

Now the South Asian island nation is showing an interest in retaining what is left. President Maithripala Sirisena, who took office last year, has retained the environment portfolio and has shown a personal interest in the project.

There are 22 species of mangroves in Sri Lanka, a third of all mangrove species found around the world. They grow in brackish water estuaries which are not favorable for other plants to grow, and create many environmental and health benefits:

— Their above-ground roots, mostly submerged in the water, produce food for small fish, crabs and shrimp and serve as a haven for breeding. Small-scale lagoon fishers have benefited from the ecosystem for generations.

— Their roots can accumulate soil particles and build landmasses while also acting as a buffer against coastal erosion. In the 2004 Asian tsunami that killed more than 35,000 Sri Lankans, areas covered by mangrove forests suffered less damage as the trees absorbed some of the energy of the waves.

— The trees absorb carbon dioxide more efficiently than other plants. Forests typically release carbon dioxide into the atmosphere as plant matter decomposes, but because mangrove habitat is much wetter, there is less oxygen activity, leaving more carbon in the soil.

— Medical researchers have isolated from 15 mangrove species anti-cancer compounds that have been shown to fight breast and liver cancer cells. Dr. Sameera Samarakoon, who was part of research by the University of Colombo, says these findings are being studied further.

Seacology, a U.S.-based nongovernmental organization, last year launched a $3.4 million, five-year mangrove conservation and replanting program with the Sri Lankan government. A museum funded by the group opened in Pambala on Tuesday, World Mangrove Day, to exhibit mangroves, fish and crab species bred in the lagoons, with facilities for study and research.

The Small Fishers' Federation, Seacology's Sri Lankan partner, is running a nursery near Pambala Lagoon, some 65 kilometers (40 miles) north of the capital, Colombo, to produce 500,000 seedlings for replanting. One thousand acres (404 hectares) of mangroves are expected to be replanted by the end of this year.

The project plans to rope in 15,000 persons, mostly the unemployed from around the lagoons, to protect mangrove plantations in return for microloans to set up small businesses.

"By offering training and funding to develop alternatives to cutting mangroves, the project's livelihoods program is alleviating poverty as well as protecting mangroves," said Duane Silverstein, Seacology's executive director. "It's a win-win situation."

Anuradha Wickramasinghe, head of the fishers' federation, says he first felt the importance of protecting mangroves in the 1990s, when mangrove forests were being fast destroyed by shrimp farmers. That sent fishermen's fish and crab catch into decline.

Sri Lanka's tourism industry is expanding along the coastline, creating the possibility for conflict, though the government intends to promote ecotourism in mangrove areas.

Srilal Mittalapala, of the Sri Lanka Hoteliers' Association, says the industry hopes the project will have a balance between conservation and development.

"The tourism industry learned a bitter lesson from the tsunami and we understand the importance of the mangroves," Mittalapala said.