GOP states benefiting from shift to wind and solar energy

WASHINGTON (AP) — If there's a War on Coal, it's increasingly clear which side is winning. Wind turbines and solar panels accounted for more than two-thirds of all new electric generation capacity added to the nation's grid in 2015, according to a recent analysis by the U.S. Department of Energy.... 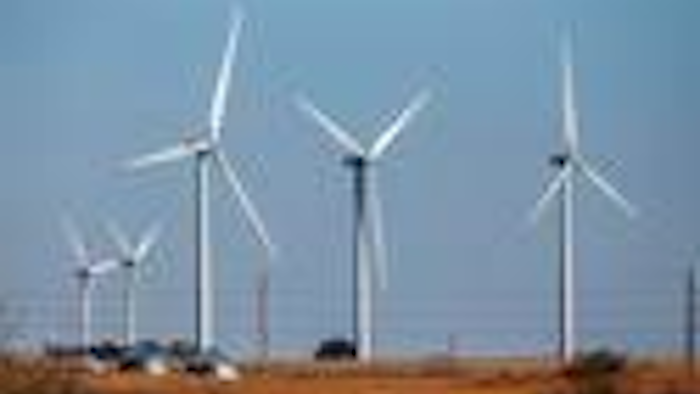 WASHINGTON (AP) — If there's a War on Coal, it's increasingly clear which side is winning.

Wind turbines and solar panels accounted for more than two-thirds of all new electric generation capacity added to the nation's grid in 2015, according to a recent analysis by the U.S. Department of Energy. The remaining third was largely new power plants fueled by natural gas, which has become cheap and plentiful as a result of hydraulic fracturing.

It was the second straight year U.S. investment in renewable energy projects has outpaced that of fossil fuels. Robust growth is once again predicted for this year.

And while Republican lawmakers in Washington have fought to protect coal-fired power plants, opposing President Barack Obama's efforts to curtail climate-warming carbon emissions, data show their home states are often the ones benefiting most from the nation's accelerating shift to renewable energy.

Leading the way in new wind projects are GOP strongholds Texas, Oklahoma and Kansas, home to some of the leading critics of climate science and renewable energy incentives in Congress. Republican-dominated North Carolina trails only California in new solar farms, thanks largely to pro-renewables polices enacted years ago under a Democratic legislature.

The most dramatic change has been seen in the plummeting cost of emissions-free wind energy, which has declined by two-thirds in the last six years thanks to the availability of cheaper, more efficient turbines. An annual analysis by the Wall Street investment firm Lazard determined that wind energy is now the lowest-cost energy source, even before federal green-energy tax incentives are factored in.

"Wind energy is very low-cost and not subject to the fuel price risk that both natural gas and coal face," said Michael Goggin, senior director of research at the American Wind Energy Association, an industry trade group. "Adding wind is cheaper than new gas or new coal. It is by far the lowest-cost resource."

Billions of dollars in private equity are going to construct massive new renewables projects, especially in the Sun Belt and Great Plains. Thousands of miles of new high-voltage transmission lines are also under construction to send power from the wind and sun from the sparsely populated areas where it is collected to the urban centers where it's needed.

Even with the surge in new projects, energy from such renewable sources as wind, solar and water accounted for only about a tenth of total U.S. power generation last year.

Still, the U.S. leads the world in wind energy with about 48,800 utility-scale turbines operating across the country, generating enough electricity to power about 20 million homes. By 2030, the Energy Department estimates wind will provide a fifth of the nation's electricity.

Meanwhile, coal has dropped over the last decade from providing half of all U.S. electricity to about one-third.

"We didn't see the decline coming this fast and this deep," said Luke Popovich, spokesman for the National Mining Association, an industry trade group. "I don't think we anticipated the determination of this administration to drive coal out of the market."

While new clean-air regulations and tax incentives for renewables are having a negative impact on coal, the plummeting cost of cleaner-burning natural gas made possible by fracking is largely driving the closure of many old coal-fired power plants. Exports of coal to foreign customers such as China also are down.

Closures mean America's coal mines now employ about only about 56,700 people, down from a peak of more than 10 times that. By contrast, the fast-growing solar industry now employs more than 210,000 workers. Wind energy accounts for another 77,000 by federal estimates.

Political giving by the big coal companies and their executives has declined, but the industry still spends heavily to protect its interests in Washington. Pro-coal interests spent at least $11 million to influence the 2014 Congressional midterm elections, according to the nonpartisan Center for Responsive Politics. More than 95 percent of that went to support Republican candidates.

Among them is Senate Majority Leader Mitch McConnell of Kentucky, who rarely misses an opportunity to blame Obama's "War on Coal" for killing mining jobs. Nearly all of the 27 states that have sued to stop the administration's carbon emissions-cutting Clean Power Plan have GOP governors. All but one of the 34 senators and 171 House members who have signed on to support the court challenge are Republicans. Sen. Joe Manchin of coal-dependent West Virginia is the lone Democrat.

For Republicans from areas benefiting from renewable energy, the political calculus is more complicated. An increasing number of them try to balance criticizing Obama's environmental efforts with quietly supporting the federal tax incentives helping drive investment in renewables.

GOP leaders compromised with Democrats and a growing number of pro-renewables Republicans to include a five-year extension of tax breaks for wind and solar projects as part of a federal budget agreement approved in December.

Republican Sen. Chuck Grassley of Iowa, among the earliest boosters of government support for wind power, points out that fossil fuels and nuclear plants have long benefited from tax credits. Last month, MidAmerican Energy announced plans to invest another $3.6 billion to add new turbines in Iowa, which already gets about a third of its electricity from the wind.

"We've seen the economic success story behind renewables up close and personal," Grassley said as the new project was announced. "There are more than 6,000 good wind jobs in Iowa."