MOBERLY, Mo. (AP) — Mike McKeown opens the back door of his Missouri farm house and is met with a chilly gust. "Stupid wind," he mutters. Today, the winds that blow through his corn and soybean farm have become more than just an irritant. The homestead in northern Missouri, which his family has... 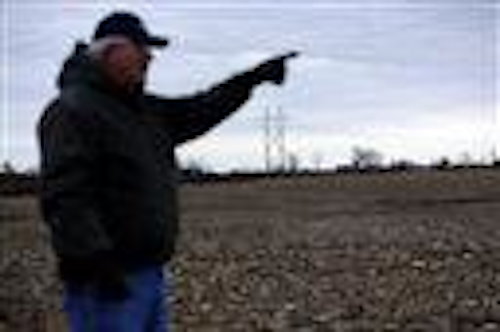 MOBERLY, Mo. (AP) — Mike McKeown opens the back door of his Missouri farm house and is met with a chilly gust. "Stupid wind," he mutters.

Today, the winds that blow through his corn and soybean farm have become more than just an irritant. The homestead in northern Missouri, which his family has owned for nearly 70 years, sits smack in the path of a proposed high-voltage line that would carry renewable energy from the wind-whipped plains of western Kansas to power-thirsty cities farther east. And McKeown doesn't like that.

Due partly to the intense opposition from local property owners, Missouri regulators have blocked the 780-mile-long Grain Belt Express power line from being built. In doing so, they have highlighted one of the toughest challenges facing the nation as it tries to shift toward a greater reliance on renewable energy.

Converting the wind and sun into electricity is increasingly affordable, but it can be difficult to get that electricity from distant plains and deserts to the places where it's needed. The reasons range from technical to regulatory.

"Transmission is the biggest long-term barrier for wind energy development," said Rob Gramlich, senior vice president of government and public affairs for the American Wind Energy Association. "That's because the best wind resources are often in remote areas on farms and ranches that are far from population centers."

To get the power from one point to another means crossing not only through hundreds of farm fields and backyards but also through multiple states with different regulatory requirements. Public lands that are subject to numerous environmental restrictions offer yet another obstacle.

Further complicating the transmission puzzle: The nation's electric grid was designed primarily to serve particular states and regions, not necessarily to move electricity from one part of the U.S. to an entirely different area.

There also are technical challenges. To ensure a steady supply of electricity, there often must be some way to store excess energy generated from strong winds and prolonged sunshine and to supplement the downtimes with other sources such as gas-fired generators.

While wind power is the fastest-growing source of new energy in the U.S., it still accounted for just 4.4 percent of the nation's electricity in 2014, according to the U.S. Energy Information Administration. Solar power contributed just 0.4 percent.

President Barack Obama's administration has encouraged the development of more wind and solar energy while imposing stricter limits on pollution from coal-fired power plants, part of his strategy to reduce the amount of heat-trapping carbon in the atmosphere. An international climate agreement announced earlier this month calls for nearly 200 countries to collectively slash carbon emissions in the decades ahead to slow the pace of global warming.

States also have been pressing utilities to generate power from cleaner sources. California is among 29 states that have adopted renewable energy requirements. In the nation's most populous state, with the world's eighth-largest economy, utilities must get half their energy from renewable sources by 2030. Vermont has set a 75 percent renewable energy standard by 2032.

Yet government regulations also have impeded the development of large-scale renewable energy projects.

Clean Line Energy Partners, the Houston-based firm behind the Grain Belt Express, had a route rejected in Arkansas. Twice, Iowa denied its requests to decide upfront — before it begins acquiring easements — whether a proposed line leading to the outskirts of Chicago is in the public interest.

Other transmission lines for renewable energy also have experienced delays and denials:

—Arizona utility regulators rejected a request by Southern California Edison in 2007 to build a 270-mile line carrying power from a site west of Phoenix to Palm Springs, California. Utility company officials said it could have prompted development of new solar power in the desert, but Arizona regulators cited concerns that California's increased power draw could have led to higher rates for Arizonans.

—In January, after a more than six-year review, the U.S. Bureau of Land Management approved a right of way across federal land for the SunZia Southwest Transmission Project, a 515-mile line carrying wind power and solar power from central New Mexico to Arizona. But New Mexico's land commissioner has since slowed down the review for another permit needed for the $2 billion project. SunZia also has a permit request pending in Arizona.

—Eight years after filing a right of way application with the Bureau of Land Management, organizers of the TransWest Express power line still are awaiting a decision on a 730-mile route that would carry electricity to the southwestern U.S. from a proposed 1,000-turbine wind farm in Wyoming.

TransWest Express president and chief executive Bill Miller originally hoped construction would begin in 2012. That goal already had been pushed back when the Obama administration in October 2011 picked the project as one of seven electrical lines nationally for review under a new "Rapid Response Team for Transmission."

But the federal approval process has been far from rapid.

"It's glacial in its pace," Miller said.

Lucas Lucero, the acting chief of the renewable energy office in the Bureau of Land Management, said federal officials have "been making steady progress" and could decide on the TransWest Express in early 2016. But he acknowledged such projects "definitely take time" to review and "have a number of challenges."

Chief among them is coordinating efforts among dozens of federal, state, county and tribal entities that have a stake in the power lines. Federal officials also have analyzed numerous alternate routes — considering the potential effect on wildlife habitat, culturally significant areas and the concerns of private landowners.

The nation's renewable energy goals potentially could be achieved more quickly if a single federal agency were given jurisdiction over interstate transmission lines. But Lucero said it's important that local officials have a say.

Many state laws were drafted to ensure consumers get the best possible service and rates from local electric monopolies. As Clean Line discovered, it can be difficult to prove the benefit for local residents of a commercial line carrying power primarily to other places.

The Arkansas Public Service Commission ruled in 2011 that Clean Line didn't qualify as a "public utility" under state law and thus could not build its Plains & Eastern transmission line carrying wind power from the Oklahoma Panhandle to Tennessee to be fed to the southeastern U.S.

Clean Line hasn't given up. It's now seeking approval for its Arkansas route from the U.S. Department of Energy, which has authority to approve new transmission lines in certain states where it already sells hydroelectric power from federally run dams. Arkansas' two U.S. senators are fighting back by holding up the confirmation of an Obama appointee to the Energy Department.

While rejecting Clean Line's Grain Belt Express earlier this year, the Missouri Public Service Commission looked primarily at whether the power line would benefit its home state, rather than the nation as a whole. The line would end near the Illinois-Indiana border, connecting to an existing grid extending all the way to the East Coast.

Although Clean Line pledged to make a portion of its power available to Missouri, state regulators determined it was not needed to meet local demand nor the state's renewable energy requirements. Regulators also cited the burden on Missouri landowners, noting that most of the 7,200 comments it received were opposed to the project.

Now Clean Line is regrouping for another try in Missouri.

The project has placed McKeown in opposition to his friend and neighbor Wayne Wilcox, a county official who views power lines crossing his cornfields as important to both the local and national economy.

"We sit at a critical place," Wilcox said, pointing out that the Clean Line poles would cross his property near an existing transmission line from a coal-fired power plant, two oil pipelines and a natural gas pipeline.

But McKeown hasn't been persuaded by the six-figure contract he could sign with Clean Line, nor the potential benefit to residents several states to the east.

"I think (wind energy) is fine," he said. But "it doesn't make sense to me to have to transport it halfway across the United States. We're smarter than that."