A former BP executive manipulated early estimates of the amount of oil spewing into the Gulf of Mexico after a 2010 rig explosion to conform to a low government estimate, then lied about it to federal agents, a prosecutor told jurors Tuesday. 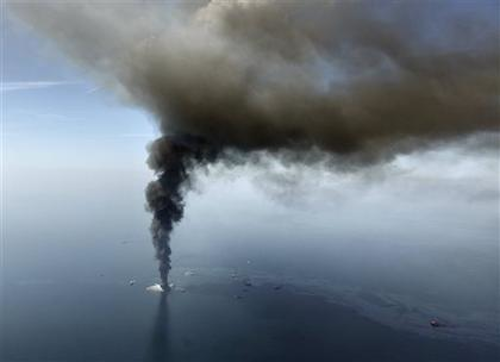 NEW ORLEANS (AP) — A former BP executive manipulated early estimates of the amount of oil spewing into the Gulf of Mexico after a 2010 rig explosion to conform to a low government estimate, then lied about it to federal agents, a prosecutor told jurors Tuesday.

Defense attorneys countered that David Rainey's estimates were the best he could do as he and other BP officials worked to shut down the flow of oil after the BP Deepwater Horizon disaster and that he had no reason to lie roughly a year later when questioned about his calculations.

Rainey is on trial on a single count of making a false statement. Another charge, obstructing a congressional investigation, was tossed out Monday by U.S. District Judge Kurt Engelhardt, although federal prosecutors urged him in papers filed Tuesday to reinstate it.

In Tuesday's opening statements, federal prosecutor Leo Tsao said the oil flow rate was important information for those working to stop a flow that lasted for 87 days — the nation's worst offshore oil disaster.

"How big a problem BP had on its hands depended on how much oil was flowing," Tsao said. He said an early government estimate of 1,000 barrels a day was soon upped to 5,000. It was that second figure that Rainey, a geologist who the government said had no experience calculating flow rates, allegedly tried to match rather than come up with an independent assessment.

Ultimately, a federal judge ruled that roughly 3.19 million barrels spilled before the damaged well was capped after 87 days — a rate of more than 36,000 barrels per day.

Prosecutors say phone text messages prove that Rainey had been told about the 5,000 barrel per day estimate before providing his own calculations. He is said to have lied about having seen the estimate during a 2011 interview with former government investigator Avi Gesser, who was the first witness.

Defense lawyer Brian Heberlig said the government has provided neither a motive nor any proof of criminal intent. Calculating an accurate flow rate in the early days and weeks after the explosion was impossible, Heberlig said. Rainey and other BP and government leaders were focused on trying to stop the spill, he said.

Still, he added, Rainey did the best he could: "His estimates were legitimate and honest."

Engelhardt told jurors at the end of the day that he thinks they'll probably begin deliberations Friday. "We're unlikely to have to go into Monday," he said. He didn't explain what prompted the new time estimate.

The judge said Wednesday's first witness will be Charles Henry of the National Oceanic and Atmospheric Administration. He worked in the spill disaster response center in Houma, and defense attorney Michael Magner described him Tuesday to the jury as "the environmental head in Houma."

The opening statements at the U.S. District Courthouse fell on the same day a federal appeals court panel heard arguments in another criminal case arising from the disaster. In that case, federal prosecutors hope to win reinstatement of an obstruction of justice conviction against a former BP engineer.

Kurt Mix was convicted on a single criminal count in 2013 after prosecutors said he deliberately deleted text messages about the amount of oil flowing from BP's Macondo well after the 2010 explosion.

But a judge ruled later that a jury forewoman tainted the deliberations by mentioning to a deadlocked jury that she had heard something outside the trial that affirmed her view of Mix's guilt.

There was no indication when the 5th Circuit would rule.

In Rainey's case, Engelhardt threw out the obstruction count after agreeing with congressional lawyers that, under the Constitution, members of Congress and their staffers could not be subpoenaed to testify. Prosecutors said Tuesday that the charge should be reinstated because they have been told by lawyers for the U.S. House that staffers are willing to testify voluntarily. They also said that Sen. Ed Markey, a Massachusetts Democrat who served in the House at the time of the investigation, is willing to testify by video conference while the Senate is in session.