More than 20 cars on an oil train derailed in rural northeastern Montana and at least two of them were leaking crude, authorities said. 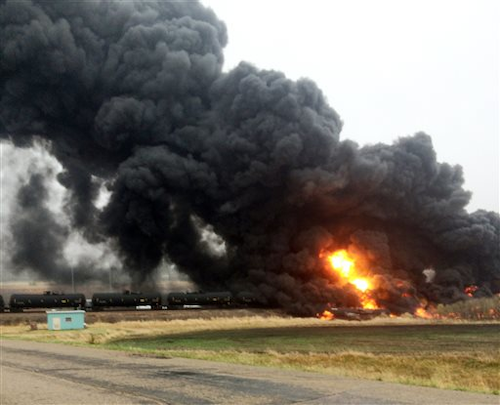 CULBERTSON, Mont. (AP) — More than 20 cars on an oil train derailed in rural northeastern Montana and at least two of them were leaking crude, authorities said. Some area homes were evacuated.

There were no immediate reports of injury or fire, but of the 21 cars that derailed only two remained upright, Roosevelt County Sheriff Jason Frederick said.

Police, fire and other emergency responders were at the site of the derailment, which forced the closure of U.S. Highway 2, the region's main artery.

Frederick told The Associated Press that crews were not getting too close to the leaking cars until a BNSF hazardous materials team arrives from Texas.

But he said that there was no immediate threat to public safety.

The sheriff didn't know how many homes were evacuated but described area as a rural setting with ranch homes spread apart.

The Billing Gazette reported that the derailment came only about six hours after rail traffic started moving again after another BNSF derailment further west near Fort Kipp on Tuesday.

Rail officials declined to specify if the train was hauling crude from North Dakota's Bakken oil patch, where growing numbers of shipments have raised safety concerns.

Trains hauling crude from the Bakken region have been involved in multiple derailments in recent years, some causing fires.