The 400-foot Polar Pioneer, owned by Transocean Ltd., was on board a heavy-lift vessel about 750 miles northwest of Hawaii when the activists approached in inflatable boats and used climbing gear to get on board. 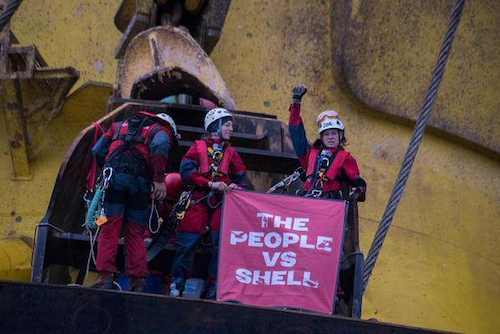 ANCHORAGE, Alaska (AP) — Six Greenpeace activists protesting Arctic offshore drilling on Monday boarded a drill rig as it was transported across the Pacific Ocean toward Seattle, where it will be staged for drilling on Shell leases in Alaska waters.

The 400-foot Polar Pioneer, owned by Transocean Ltd., was on board a heavy-lift vessel about 750 miles northwest of Hawaii when the activists approached in inflatable boats and used climbing gear to get on board, Greenpeace spokesman Travis Nichols said.

They plan to unfurl a banner in protest of Arctic offshore drilling but have no plans to interfere with the ship's navigations, he said.

"All six people on the ship are experienced climbers in their normal daily lives and have the professional training and equipment needed to climb on to the rig safely without interfering with its operation," Nichols said by email.

Shell USA spokeswoman Kelly Op De Weegh said by email that Greenpeace protesters illegally boarded the vessel, called the Blue Marlin, jeopardizing their safety and that of the crew.

"We respect their views and value the dialogue," Op De Weegh wrote. "We will not, however, condone the illegal tactics employed by Greenpeace. Nor will we allow these stunts to distract from preparations underway to execute a safe and responsible exploration program."

Petty Officer Third Class Melissa McKenzie of the Coast Guard's 14th District in Honolulu confirmed the Coast Guard received word from Blue Marlin crew members that a group had boarded the vessel. The office did not receive a request for assistance.

The Polar Pioneer left Malaysia in early March. It is one of two drill rigs Shell hopes to use for exploratory drilling during the summer open water season in the Chukchi Sea off Alaska's northwest coast if it can obtain all necessary permits.

Using two vessels, the company drilled pilot holes and performed other preliminary work in both the Chukchi and the Beaufort seas. Shell was prohibited from drilling into oil-bearing rock because it did not have required response equipment on hand.

The company experienced problems in the challenging conditions, culminating with the drill vessel Kulluk, which was used in the Beaufort Sea, running aground near Kodiak when it broke loose from its tow vessel.

The company hired by Royal Dutch Shell PLC in 2012 to drill on petroleum leases in the Chukchi — Sugarland, Texas-based Noble Drilling U.S. LLC — in December agreed to pay $12.2 million after pleading guilty to eight felony environmental and maritime crimes on board the Noble Discoverer. That rig is the second one Shell intends to use this year if it obtains the necessary permits.

Arctic offshore drilling is bitterly opposed by conservation groups that claim oil companies have not demonstrated they can clean up a major spill in ocean water choked with ice. They also say the leases are far from infrastructure such as Coast Guard bases, deep-water ports, major airports and other resources that could be of use in a spill.

Nichols said the six activists have the training and experience to carry out the protest safely. They hope to unfurl a banner containing the names of millions of people from around the world who oppose Arctic drilling, he said.

The activists are carrying several days' worth of supplies.

"The most dangerous thing about this rig isn't the Greenpeace climbers," Nichols said. "It's the reckless drilling Shell wants it to start this summer in Alaska's Chukchi Sea, where an accident would be impossible to clean up and devastate the delicate Arctic environment."

The activists launched their inflatable boats from the Greenpeace ship Esperanza, Greenpeace said in an announcement. The six protesters are from the United States, Germany, New Zealand, Australia, Sweden and Austria.

Greenpeace has targeted Shell before.

In February 2012, actress Lucy Lawless and seven other activists with the organization climbed a drilling tower on the Arctic-bound Noble Discoverer while it was in port in New Zealand. Lawless spent four days atop the 174-foot tower, camping and blogging about her experiences. The oil-exploration protest briefly delayed the ship's voyage.

Shell later obtained a U.S. federal court injunction that ordered Greenpeace USA to stay away from its drill rigs destined for the Arctic through October 2012.