A lightning strike sparked a fire and explosion that destroyed the third North Dakota saltwater disposal facility in recent weeks, sending thick black smoke billowing into the sky and leaving the smell of oil in the air. 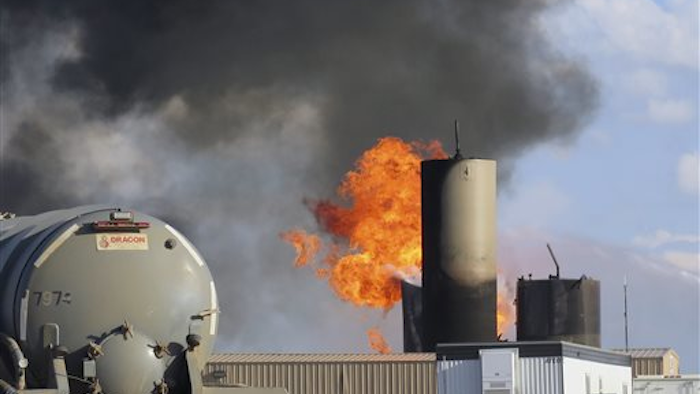 ALEXANDER, N.D. (AP) — A lightning strike sparked a fire and explosion that destroyed the third North Dakota saltwater disposal facility in recent weeks, sending thick black smoke billowing into the sky and leaving the smell of oil in the air.

The latest incident was at a saltwater disposal well owned by Dallas-based 1804 Operating and located several miles south of the tiny town of Alexander. No injuries were reported.

In a statement, the state's Department of Health said the incident led to the release of 2,813 barrels of saltwater and 649 barrels of oil. A barrel is 42 gallons.

The Department of Health said some fluids flowed off site but were contained before they were able to reach a tributary leading to a nearby creek.

On Monday night, the slightly stinging smell of oil and the smoke from the fire drew curious onlookers from a truck stop next door. Cleanup crews were busy moving contaminated dirt and laying down booms around a small reservoir as firefighters tried to quell the blaze.

The explosion blew the lid of one of the tanks into a nearby field.

McKenzie County emergency coordinator Karolin Rockvoy said she first learned of the fire at 5 p.m. on Monday. As of 7:30 a.m. on Tuesday, the fire was still burning. Rockvoy said firefighters were letting the blaze burn itself out.

Fighting the fire "just makes a bigger mess," she said of the potential environmental impact.

Also called brine, saltwater is a byproduct of oil production. It is 10 to 30 times saltier than seawater, is considered an environmental hazard by the state and must be disposed of in special facilities.

Saltwater contains residual amounts of oil that is skimmed at disposal facilities by operators hoping to eke out a few more barrels of production. But in tanks, the mix of gas and oil that comes with the saltwater can be volatile.

In recent weeks, three of the state's more than 440 active saltwater disposal facilities have been destroyed by fires and explosions sparked by lightning strikes.

On June 27, lightning hit a Basic Energy Services saltwater disposal facility in Mountrail County spilling 580 barrels of oil and 1,800 barrels of brine. The company estimates it will cost up to $2 million to clean up and rebuild the site's above ground facilities.

Experts say even lightning strikes more than 300 feet away can cause a spark that sets off a saltwater disposal site.

Despite the danger posed to saltwater disposal facilities by summer storms, North Dakota and other oil producing states do not require companies to install lightning protection systems on their oil field facilities.

At the scene of the blaze on Monday night, 1804 Operating President Fred Kershisnik said the company had taken measures to protect against lightning at the site.