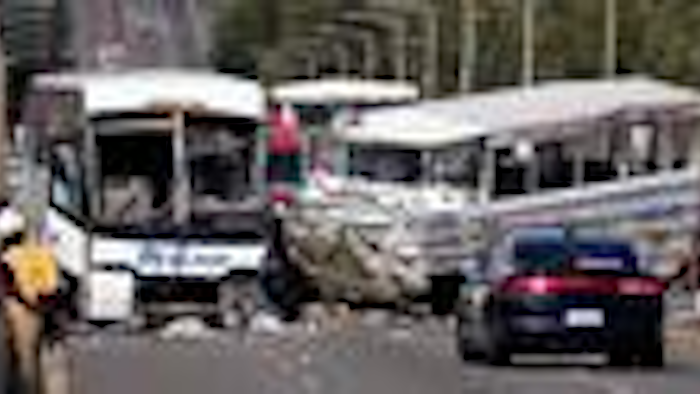 SEATTLE (AP) — The Latest on a National Transportation Safety Board hearing to determine the cause of a deadly amphibious tour boat crash in Seattle in 2015 (all times local):

An investigator with the National Transportation Safety Board says Ride the Ducks International sent out an urgent service bulletin in 2013 alerting operators about problems with the axle housing of the amphibious passenger vehicles.

In 2015, one of the boats was involved in a crash in Seattle that left five people died and 69 people injured. Earlier Tuesday, NTSB Chairman Christopher Hart said the Ride the Ducks vehicle had a fractured left axle housing.

The NTSB said at a meeting about the crash that a copy of the service bulletin was found in the Seattle company's office, but its investigation determined the operators didn't fix the problems.

Investigator Brian Bragonier says Ride the Ducks Seattle lacked the protocols to ensure that maintenance was completed properly and didn't address the known risk of an axle housing failure.

Another investigator said the recommendations in the bulletin may not have adequately fixed the problems with the axle.

The broken axle caused the driver to lose control and the Duck vehicle crossed into oncoming traffic.

The chairman of the National Transportation Safety Board says an investigation into a deadly amphibious tour boat crash in Seattle found it was caused by a mechanical failure.

Hart said in his opening statement at a meeting of the agency that the chain of events leading to the crash began years before it happened.

He says there were missing layers of safety oversight in the way amphibious passenger vehicles were manufactured, operated and maintained.

A safety defect in the axle house of the model of the vehicle in the crash had been found, but a modification didn't address the defect.

The board will make safety recommendations after hearing the full report.

The National Transportation Safety Board is meeting to determine the probable cause of the 2015 crash of a Ride the Ducks vehicle that left five people dead and dozens injured.

The amphibious passenger vehicle was traveling north over the Aurora Bridge on State Route 99 in Seattle when it crossed the center line into the southbound lanes.

Duck 6 hit a charter bus full of college students, killing five and injuring people on both vehicles. Three other vehicles were damaged in the crash.

The NTSB will meet in Washington D.C. on Tuesday to review the evidence collected in order to learn what likely caused the crash.