For many supporters, Trump is a thing called hope

MENOMONIE, Wis. (AP) — On election night, when Donald Trump claimed victory in her home state of Wisconsin, Shay Chamberlin was so excited she passed out. Chamberlain believes Trump is her savior, sent by God to save America from ruin. She owns a women's clothing store in this remote town; her... 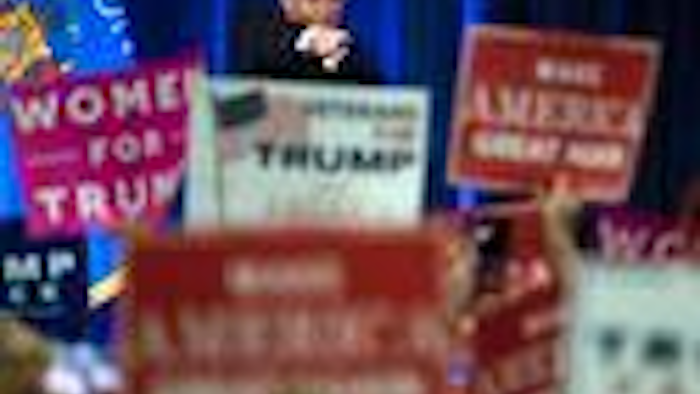 MENOMONIE, Wis. (AP) — On election night, when Donald Trump claimed victory in her home state of Wisconsin, Shay Chamberlin was so excited she passed out.

Chamberlain believes Trump is her savior, sent by God to save America from ruin. She owns a women's clothing store in this remote town; her husband runs a construction company. They have two children and barely get by on $44,000 a year, living paycheck to paycheck.

In his victory speech, Trump called people like Chamberlain and her family America's "forgotten men and women" — the blue-collar workers in the manufacturing towns of the Rust Belt and the hallowing coalfields of Appalachia who propelled him to an improbable victory. They felt left behind by progress, laughed at by the elite, and so put their faith in the billionaire businessman with a sharp tongue and short temper who promised to Make America Great Again.

When Trump first ran, Chamberlain thought to herself: "That's the man everybody has been praying for." And she now feels vindicated by his victory.

Not all of Trump's support came from the blue-collar downtrodden. But the Republican's overwhelming backing among whites with less than a college education is at least partly a reflection of how little the economic recovery since the Great Recession has benefited them. Their job opportunities have dwindled and their incomes have fallen, even as broader measures of the nation's job market show improvement. But they also turned to him to hold back the tide of social change: same-sex marriage, transgender rights, a society growing more racially diverse.

The white working class, long ignored, found an unlikely spokesman in Trump. He promised to build the wall to keep out immigrants. He promised to tear up trade deals that have ushered American factory jobs overseas. He promised to put blue-collar America back to work and restore the country to a time when white workers felt appreciated and fulfilled.

"I feel like, not just most, but all Trump supporters are true patriots," said 59-year-old Ginger Austin, who owns a graphics company in a tiny town in Jones County, one of the poorest places in North Carolina. "They love this country. But they're taking our country away, and they're changing it. They're just changing everything. All our rights are just slowly being dwindled away."

She's angry at the Republican Party she has supported all her life. She is angry at Barack Obama and the Affordable Care Act. She is angry that America is changing, and worried that her grandchildren are growing up in a world too liberal and too politically correct.

The nation woke up Wednesday morning to learn just how starkly divided it has grown: Hillary Clinton won the popular vote by less than 200,000 ballots. But Trump won battleground states that had voted for Obama twice. Thousands of registered Democrats, including many former union workers from the mines and factories, crossed party lines and sided with Trump.

For example, in Dunn County, where Shay Chamberlin lives, Obama beat Mitt Romney 53 percent to 46 percent in 2012, and John McCain 57 percent to 42 percent four years earlier. But it flipped to back Donald Trump, 52 percent to 41 percent, over Clinton.

Scott Hiltgen, a 66-year-old small business owner in Wisconsin, called Washington a "cesspool" of career politicians, aware of and indifferent to the plight of the American worker.

"We are considered flyover country, as you well know, and they don't care about us," he said. "And I think it was the silent majority that finally said, 'Enough's enough. We want a change. We don't like the way things are going.'"

The Great Recession wiped out millions of middle-income jobs in manufacturing, office administrative work and construction, and those jobs haven't returned, even as the nation now has 6.5 million more jobs than it did before the recession began. In many parts of the country, they have been replaced with lower-income work in restaurants, hotels, and in home health care.

This "hollowing out" of the nation's economy has left many Americans with high school degrees feeling shut out of the middle class.

Jerry Blackburn, a retired county official in rural Virginia, said he feels like people from someplace else took all they could from him and his neighbors and then left them with nothing.

Miners streamed into a convenience store on a highway between one struggling, West Virginia coal town and another on Wednesday morning. From behind the counter, manager Mary Jones recognized something she hadn't heard in years: Hope.

"I think we sent a message to Washington that we're tired of them sitting up there doing nothing to help the working-class people," said Jones, a native of Wyoming County, where the collapse of the coal industry has left behind a string tumbledown houses and a quarter of families in poverty.

Coal trucks used to barrel by all day and the parking lot stayed full. No trucks come by anymore. The store is for sale. She's not sure she'll have a job much longer and is certain she won't find another. They struggle to make enough money to pay the bills and write the paychecks.

She considers the ballot she cast for Trump as a protest against Clinton and every other member of the political elite.

"Working-class people built this country and now the working class people have been forgotten," she said. "It's about time they paid attention."

But in West Virginia, Jones worries that the working class is too far gone to be saved.

"There's some things you can do as a president. And there's something you can't. They all make promises, I just don't know how he can keep all those promises," she said. "I feel more hopeful today than I have in a long time. But I'm still scared for the future."