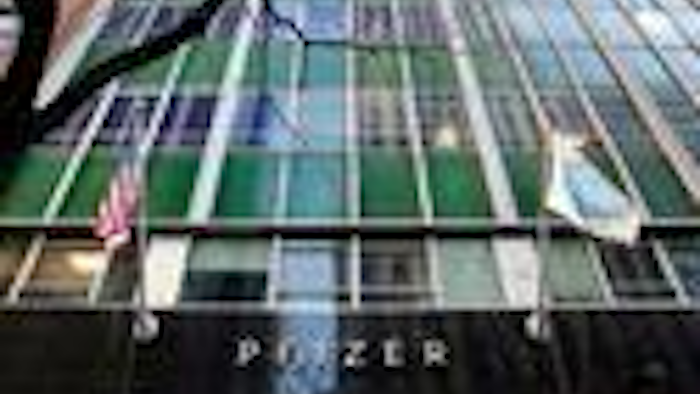 Pfizer Inc.'s version, called Inflectra, will hit pharmacies in late November. It will be only the second so-called biosimilar drug available in the U.S.

Biosimilars are near-copies of biologic drugs, which are very expensive injected medicines that are "manufactured" inside living cells, rather than by mixing chemicals together.

New York-based Pfizer said it will sell Inflectra at a 15 percent discount to the list price for Remicade. J&J said in a statement it will compete with Inflectra "through a variety of innovative contracting options, discounts and rebates to payers, providers and pharmacy benefit managers" to keep Remicade affordable for patients.

Currently, there's only one biosimilar for sale in the U.S., Zarxio from Swiss drugmaker Novartis AG's generic drug division, Sandoz. Zarxio was launched in September 2015, at a 15 percent price discount to Amgen Inc.'s Neupogen, which boosts white blood cell production to prevent infections in patients with cancer and a few other conditions.

U.S. insurers, doctors and patients have been eager for access to cheaper versions of biologic drugs, which can cost $100,000 or more annually. Last year, six of the 10 bestselling medicines by global revenue were biologics, with about $49 billion in combined sales.

More than 20 biosimilar versions of seven different medicines now are on the market in Europe. Bu in the U.S., biosimilars have been delayed by the lengthy process of setting up rules for their approval, as well as lawsuits between drugmakers.

A 2010 law allows near-copies of biologic drugs, known as biosimilars, after 12 years of market exclusivity for the original. But so far the makers of original drugs facing biosimilar rivals have been trying to delay that competition with lawsuits over whether the original drug still has a patent in force that protects its monopoly.

In the case of Inflectra, litigation between Pfizer and Johnson & Johnson, which is based in New Brunswick, New Jersey, is continuing over whether Remicade still has a valid patent. A federal judge in August ruled the patent was invalid, but J&J is appealing that. If Pfizer loses the litigation, it would face substantial financial penalties because it's making what's called an "at-risk" launch of Inflectra.

Remicade is known chemically as infliximab. Inflectra will bear the chemical name infliximab-dyyb, as the U.S. Food and Drug Administration requires that biosimilar drugs have a suffix attached to their name to distinguish the biosimlar from the original medicine.

According to J&J, Remicade has treated more than 2.6 million people worldwide since 1998.