Cash is piling up faster than Warren Buffett can invest it

OMAHA, Neb. (AP) — Warren Buffett has the kind of money problem most people would envy: a growing mountain of cash. Nearly $73 billion piled up at Berkshire Hathaway by mid-summer, more than Buffett's conglomerate has ever held before. And the total continues growing every day Buffett doesn't... 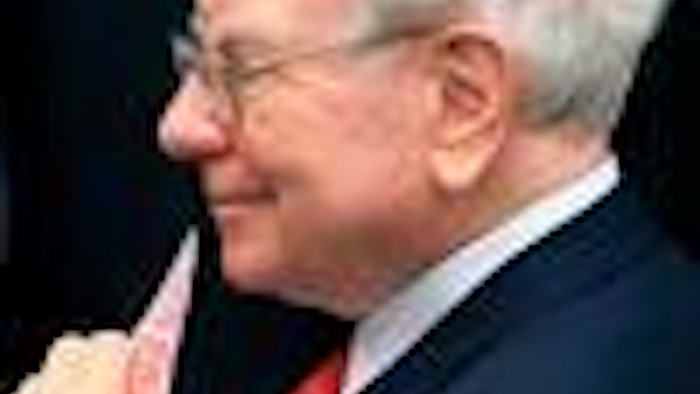 OMAHA, Neb. (AP) — Warren Buffett has the kind of money problem most people would envy: a growing mountain of cash.

Nearly $73 billion piled up at Berkshire Hathaway by mid-summer, more than Buffett's conglomerate has ever held before.

Buffett's options include buying entire businesses, picking up a few million shares of stock or investing more in companies Berkshire already owns, such as BNSF railroad and the utilities of Berkshire Hathaway energy.

So far, Buffett appears to be mostly sitting on the cash since January, when Berkshire completed its biggest acquisition in its history, a $32.36 billion deal for aviation parts maker Precision Castparts.

"I think he's looking for the right price on something outstanding," said investor Andy Kilpatrick, who wrote "Of Permanent Value: The Story of Warren Buffett."

Of course, not all of Berkshire's cash is available because Buffett wants to keep at least $20 billion on hand at all times just in case Berkshire's insurance companies have to pay a big claim or some other need arises.

But Buffett says he's always on the hunt for sizeable acquisitions that would fit well inside Berkshire, but he won't pay more than he thinks a company is worth.

Buffett will only go after companies that fit his criteria for large, proven businesses he can understand and that have an enduring competitive advantage.

"It's hard to tell what he might be looking for," said George Morgan, who teaches finance at the University of Nebraska at Omaha. "All we can do is wait and see."

Buffett never discusses what he might buy beforehand, and he doesn't talk much about all the deals he says no to.

But that doesn't stop investors from guessing what Buffett might buy next. Morgan's favorite idea is that Berkshire might buy Mars Candy if the family that controls that privately-held firm ever wants to sell. Buffett has long used Snickers candy bars as the example when he explains the concept of a durable competitive advantage.

The fact that Mars now plans to buy out Berkshire's $2.1 billion in preferred stock in its Wrigley gum unit may sour speculation about Buffett adding another candy maker alongside Berkshire's See's Candy, but the repurchase will add even more cash to Buffett's pile for other investments.

Other investors speculate that Berkshire might continue expanding its utility unit. Over the past few years, Berkshire has spent $5.6 billion to buy Nevada utility NV Energy in 2013 and another $2.7 billion to buy Canadian power transmission provider AltaLink in 2014.

Buffett has said that Berkshire will likely team up again with the 3G Capital investment firm at some point. They already worked together to buy Kraft Foods and Heinz, but it's not clear when the next deal involving 3G might come.

In the current interest rate environment, Berkshire is earning very little on its mountain of cash, but Buffett isn't likely to feel much pressure from shareholders to make a quick acquisition or start paying a dividend for the first time since he took over Berkshire in 1965.

After all, Buffett still controls nearly one-third of the voting power of Berkshire's stock, and two years ago Berkshire shareholders overwhelmingly rejected the idea of a dividend.

And Berkshire shareholders don't have to look back very far to see how valuable a pile of cash can be.

In the wake of the financial crisis of 2008, Buffett offered billions in financing to Goldman Sachs, General Electric, Harley-Davidson and others in return for steep interest payments and, in some cases, preferred stock.

But until Buffett finds his next deal he'll keep doing what he has for decades: read more business reports, take the occasional phone call and wait for the right pitch.

Buffett compares investing to baseball, except that investing is a game where the hitter can stand at the plate indefinitely waiting for the right pitch.

"The stock market is a no-called-strike game. You don't have to swing at everything," Buffett said in "The Warren Buffett Way." ''The problem when you're a money manager is that your fans keep yelling, 'Swing, you bum!' "