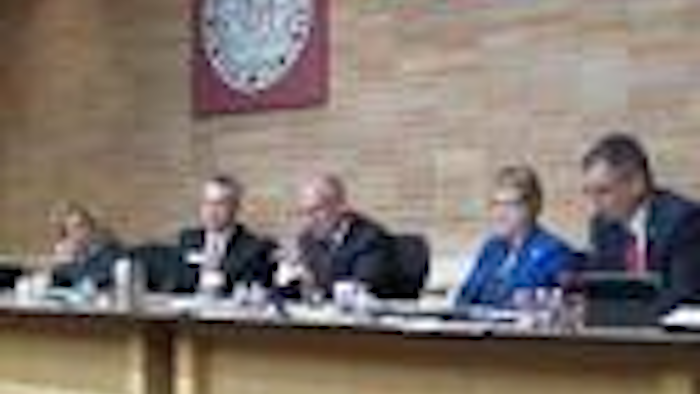 Gov. Matt Mead and the state's other four statewide elected officials, sitting as the State Loan and Investment Board, said they hope the loans help the state diversify its economy even as energy production, the state's traditional economic engine, has been slowing down in recent years.

The loans are the first from Wyoming's Large Project Economic Development Fund established by the Legislature in 2014 with $25 million. The board transferred $16 million from another loan program Thursday to cover the three loans.

The board voted to approve the following:

— $15 million loan to Standard Alcohol, which has corporate offices in Denver. The company intends to build a fuel additive production facility near Cheyenne.

— $15 million to Atlas Carbon, a Wyoming company, which uses coal to make activated carbon for use in filtering emissions from coal-fired power plants.

The loans still must pass state legal and technical review before they may become final.

Bernhard W. Opitz, an officer with Cody Laboratories, told the board that his company currently produces about 5 tons of pharmaceutical products a year and plans to add 11 tons annually through its planned expansion. The plant currently employs over 100 people and will hire more as it expands, he said.

While Lannett Company is a large corporation, Opitz said the company is interested in securing the state loan as an expression of the state's commitment to having the business expand in the state. "We very much appreciate the statement of trust and support in our project," he said.

Tim Wruble, an official with Cabot, a Boston-based firm with activated carbon production plants in Texas, Oklahoma and Canada, told the board that the market nationwide is soft.

Wruble acknowledged that his firm is a competitor of Atlas Carbon, but said he disagrees that there's a coming huge demand for activated carbon to supply coal-fired power plants as they struggle to meet tighter federal air quality standards. Under questioning from Mead, Wruble said his company has projected growth in the market for activated carbon to address mercury emissions.

Frank Levy, CEO of Atlas Carbon, told the board that his company's location in Gillette, in the heart of Wyoming coal country, gives it an advantage over other firms. The company markets activated carbon to power plants and water treatment plants for use in filtration.

"We can compete with any of them," Levy told the board.

Standard Alcohol CEO Michael Pardun said his company uses carbon dioxide, a common byproduct of natural gas production, to make fuel additives. He said the company had explored building a plant in Colorado but found Wyoming had a better tax and business climate.

Pardun said the plant the company intends to build near Cheyenne will employ 32 people.