Malaysian court lets off Aussies who partied in swimsuits

KUALA LUMPUR, Malaysia (AP) — Nine Australians charged after stripping down to skimpy swimsuits at the Malaysian Formula One Grand Prix walked free Thursday without a conviction after pleading guilty to causing a public nuisance and apologizing. The nine were detained Sunday after they partied in... 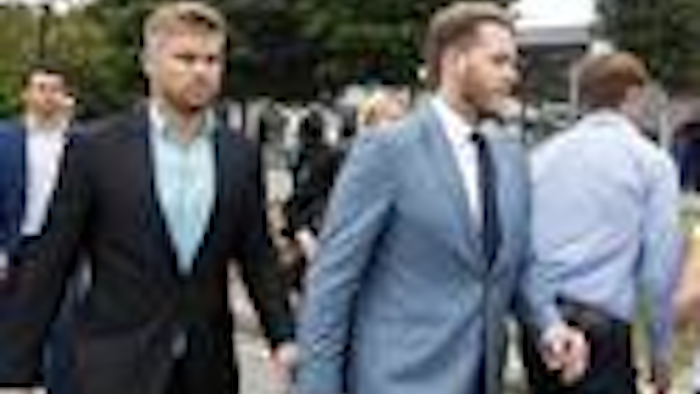 KUALA LUMPUR, Malaysia (AP) — Nine Australians charged after stripping down to skimpy swimsuits at the Malaysian Formula One Grand Prix walked free Thursday without a conviction after pleading guilty to causing a public nuisance and apologizing.

The nine were detained Sunday after they partied in Budgy Smuggler-brand swimsuits decorated with the Malaysian flag and drank beer from shoes in full view of thousands of spectators at the Sepang track after Australian driver Daniel Ricciardo won the race.

Budgy smuggler is Australian slang for a tight swimsuit worn by men, and the drinking out of a shoe was done to honor Ricciardo, who drinks out of his shoes to celebrate winning.

Defense lawyer Muhammad Shafee Abdullah said the court accepted his argument that it was a trivial offense and that the nine, dressed in suits in the court, were ignorant of the local culture and remorseful. He said one of them read out an apology to the court, admitting to an "error of judgment."

Shafee said their actions were not illegal in most countries, including Australia.

"We are sensitive about it but they didn't know. They sincerely thought it was a respect and a celebration with Malaysians," Shafee said.

"The court accepted my mitigation that this was a trivial offense and under extenuating circumstances because they misunderstood the local culture. They have been admonished by the court and released without conviction," he added.

He said one of the men fainted in court briefly due to dehydration.

The nine, mostly Sydney University graduates in their 20s, left the court without speaking to reporters. The men included Jack Walker, an adviser to Australian Defense Industry Minister Chris Pyne.

His father John Walker said they were very thankful.

"There's no charge, there's no fine and the boys apologized. They recognized what they did was unacceptable but they have been completely cleared and are free to travel and resume their lives," he said.

Ricciardo, the driver whose success inspired the Australians' beer-fueled revelry, described the incident as "pretty harmless."

"I respect the laws of Malaysia, but beyond that I don't think they deserve any further punishment," Ricciardo told Sydney's The Daily Telegraph newspaper.

"In Australia, it's a bit different, but I'm very sure they didn't intend to offend anyone," he said.

Budgy Smuggler, the Sydney-based, family-owned swimsuit manufacturer, did not immediately respond to a request for comment. The company features on its website and social media photographs of customers wearing its swimwear in public locations, including in front of Westminster Palace in London and the Eiffel Tower in Paris.

The Australian media has dubbed the men the Budgie Nine, using a spelling variation of the abbreviated name of the budgerigar, a small Australian parrot. The name plays on nine Australians arrested in Indonesia for heroin trafficking in 2005 who became known as the Bali Nine.