NEW YORK (AP) — After a yearlong renovation, an iron-hulled sailing ship built in 1885 is returning to New York City's seaport district as the centerpiece of a museum that is making a comeback after having the wind knocked out of its sails after Superstorm Sandy. The Wavertree, one of the last... 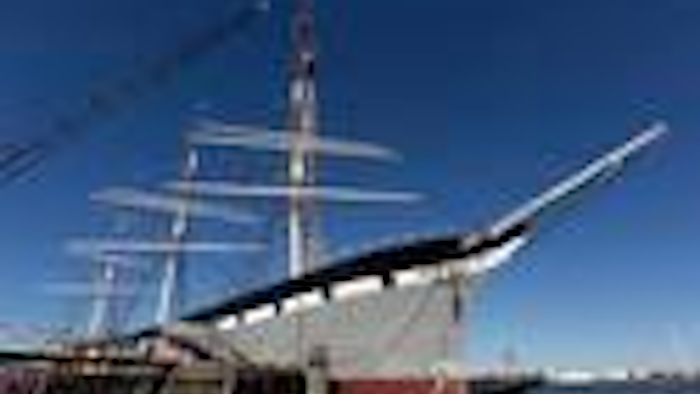 NEW YORK (AP) — After a yearlong renovation, an iron-hulled sailing ship built in 1885 is returning to New York City's seaport district as the centerpiece of a museum that is making a comeback after having the wind knocked out of its sails after Superstorm Sandy.

The Wavertree, one of the last large sailing ships made of wrought-iron and the largest still afloat, is scheduled to be moved Saturday to a South Street Seaport Museum berth at the southern tip of Manhattan.

Its return marks a major step in the recovery of the museum, a 49-year-old institution that interprets New York City's maritime history through exhibitions and a fleet of historic ships. The museum is set in an 11-block historic district of former mercantile buildings.

The museum was already on shaky financial ground when tourism in the seaport was hit by three consecutive blows: the 9/11 attacks, the 2008 Recession and major flooding when Sandy hit in 2012.

"Sandy was just a devastating body blow just as we were already beginning to recover from the other two. So that we're even alive is really miraculous," said the museum's executive director, Jonathan Boulware, a lifelong sailor and historic ship expert.

The museum's struggles parallel the seaport district's attempts to revive itself after the hurricane. While its brick and cobblestone bones survived the flooding, the district largely became a flooded-out shell. A shopping mall that drew tourist traffic, situated on a pier below the Brooklyn Bridge, was demolished.

Now the area, too, is getting back on track.

A new 300,000-square-foot retail center is under construction to replace the torn-down mall on Pier 17. A multiplex theater is set to open. Other projects include conversion of the historic Tin Building into a fish hall. Outdoor cafes have opened and a pair of acclaimed chefs, Jean-Georges Vongerichten and David Chang, have plans to open restaurants.

The Wavertree's return comes just weeks after the other flagship in the Seaport Museum's fleet, a huge 1911 four-mast sailing ship called the Peking, departed Manhattan for good. The museum couldn't afford to keep the ship and it is being given to an organization in Hamburg, Germany, where it was manufactured, Boulware said.

Even before Sandy, the museum had an operating deficit. At the city's request, the Museum of the City of New York, with a $2 million grant from the Lower Manhattan Development Corporation, took over management from 2011 to 2013. Boulware took the helm in 2015 after previously serving as its interim president.

Since the storm, the museum has increased membership and attendance, rebuilt its education and public programming and reactivated an 1893 schooner as a sailing school vessel. In March, it opened its first exhibition since Sandy that examines the seaport's role in securing New York's place as America's largest city and its rise to become the world's busiest port by the early 20th century.

Boulware estimates it will take five to seven years before the museum is "where I want us to be in terms of attendance, programmatic diversity and institutional stability."

Amid the changes, the Wavertree will stand as the type of merchant ship that would have dominated the seaport in the 19th century. It plied the seas for 25 years carrying cargo to ports all over the world.

In 1910, a Cape Horn gale tore off its masts and the windjammer was sold and used as a floating warehouse in Chile and decades later as a sand barge in Argentina. The museum acquired it in 1968.

Over the last 16 months, the 325-foot ship got a mast-to-hull, city-funded restoration that included a steel deck to keep water out of the vessel.

Now that it's shipshape, visitors will be able to go aboard "and actually work the gear of the ship," said Boulware.

Steve White, the president of Mystic Seaport museum in Mystic, Connecticut, said it is important "to protect and preserve these vessels that are as iconic to American history as a Monet would be to the period of impressionism."

"These are our Monets, our Mona Lisas," he said. "They're very big and much more difficult to conserve but in our minds just as important."