KANSAS CITY, Mo. (AP) — Gathered for a free music festival, a crowd waits to see one of the headline attractions — an exhibit about fast-food ingredients. On display: Beakers of powders and liquids that purportedly go into what is clearly meant to look like a McDonald's burger. Just below are... 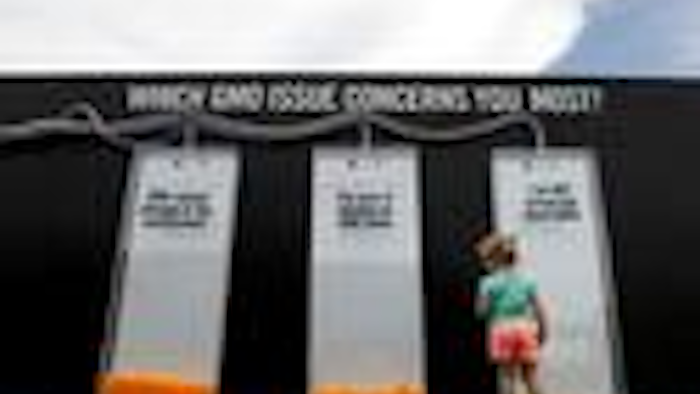 KANSAS CITY, Mo. (AP) — Gathered for a free music festival, a crowd waits to see one of the headline attractions — an exhibit about fast-food ingredients.

On display: Beakers of powders and liquids that purportedly go into what is clearly meant to look like a McDonald's burger. Just below are leaves and spices that Chipotle says make up its burrito. As pop bands perform nearby, other festivalgoers play an online game fighting a "galactic battle against artificial ingredients."

While the burrito maker still struggles to recover from an E. coli outbreak last year, its previous success in presenting itself as a reformer has led companies big and small to follow suit as they seek part of the $256 billion that Americans spend on fast-food each year. But some are positioning themselves as advocates for change before accomplishing some health goals, and skeptics say even well-intentioned marketing can be a disingenuous way to help people rationalize overeating.

The message is aimed at those who feel the established food system is to blame for poor eating habits, and tries to engage them to feel like allies rather than customers.

"Identifying who the enemy is" can be a key part of effective marketing, says branding consultant Laura Ries.

Salad chain Sweetgreen's campaign to fix what it calls the "broken" food system asks people to join its "movement" and borrows self-help language in saying the first step is "admitting there's a problem." Panera has challenged other chains to make kids' meals without artificial ingredients, although it hadn't done so itself at the time.

This kind of marketing has even changed the way the industry's giants talk about themselves. McDonald's unveiled a food "philosophy" this summer and announced it was eliminating some unpalatable-sounding ingredients. Wendy's casts itself as part of the "farm-to-fork, fast-food trend," and Taco Bell, which has been testing a taco shell made out of fried chicken, refers to "the farms that make our food."

Among the about 18,000 attendees at Chipotle's festival this summer in Kansas City, 21-year-old Mario Curiale said he was taking in the company-sponsored exhibits with some skepticism. But he liked that Chipotle was encouraging interest in food.

"I don't think high school did a really good job on educating us on these sort of issues. If you're interested, you have to go out and learn it yourself," he said.

While more attention on food issues may be progress, some see it as a way to distract people with feel-good messages.

"It can be well-intentioned marketing, but it's still marketing," said Yoni Freedhoff, an obesity expert at the University of Ottawa.

Obesity is being fueled in part by people eating out more often, Freedhoff said, with restaurants typically serving up decadent portions. Touting wholesome ingredients doesn't address that, he noted, and may even make it worse by blinding people to how much they're consuming.

Much smaller competitors are joining in. Local, which touts its "revolutionary fast food" in two low-income California locations, says "giant corporations that feed most of America have degraded our communities by maximizing profit."

"Let's plant the seeds and wake people up!!!" its website urges, alongside menus listing "Chicken Nugs" for $3. The company did not respond to requests for details about its sourcing.

In Colorado, entrepreneur Kimbal Musk plans a fast-food restaurant as part of his push to create a "real food culture." Musk, the brother of tech mogul Elon Musk, already has several sit-down restaurants and blames processed foods low in nutrients for leaving people "fat and starving."

The blurring of marketing and advocacy has popped up among packaged food makers, too. Kind, which makes snack and meal bars out of fruits and nuts, recently launched a group for dietitians who want to discuss nutrition topics. The company also sees it as an opportunity to boost sales by offering the dietitians tips for incorporating its bars into people's diets.

Chipotle remains an adept practitioner of the strategy, even as it employs some loopholes. It announced last year that it rid its menu of genetically modified ingredients, but serves Coca-Cola sodas made with high-fructose corn syrup. It describes its meat as "responsibly raised," an unregulated term that lets animals eat GMO feed.

The company says most customers simply like its food. But while its touting of quality ingredients and ethical sourcing practices may have helped sales, that positioning may also partly explain its lagging sales since an E. coli outbreak last year: Staking its reputation to the superior quality of its ingredients can make any missteps more devastating.

Chipotle, which was spun off by McDonald's in 2006 and has more than 2,000 outlets, raked in more than $4.5 billion in sales last year but still defines itself as an outsider. A billboard at the Cultivate festival headlined "FACTS" stated: "Nope, Chipotle is not owned by McDonald's."

Though free music was the draw for many attendees, the chance to earn a burrito sent them to see the exhibits.

The interior of a trailer recreated crowded conditions for pigs on factory farms along with a screen reading, "Together we can change the system." A grassy area outside depicted the idyllic farms where Chipotle suggests it gets its pork. A farmer showed photos of his piglets.

Jon Gilmor, a 22-year-old who interned at GMO seed maker Monsanto, praised Chipotle for encouraging interest in food sourcing. But he was dubious about an exhibit on the chain ridding its menu of genetically modified ingredients.

Gilmor, in a "Monsanto Together" T-shirt, said he thought what he wore would be ironic but also wanted to proclaim his belief that GMOs are safe and that Chipotle plays on unfounded concerns.

"It's an issue that can get a lot of people to come to their stores," he said.