PORTLAND, Ore. (AP) — A Pacific Northwest tribe is traveling nearly 5,000 miles across Canada and the United States with a 22-foot-tall totem pole on a flatbed truck in a symbolic journey meant to galvanize opposition to fossil fuel infrastructure projects they believe will imperil native lands. ... 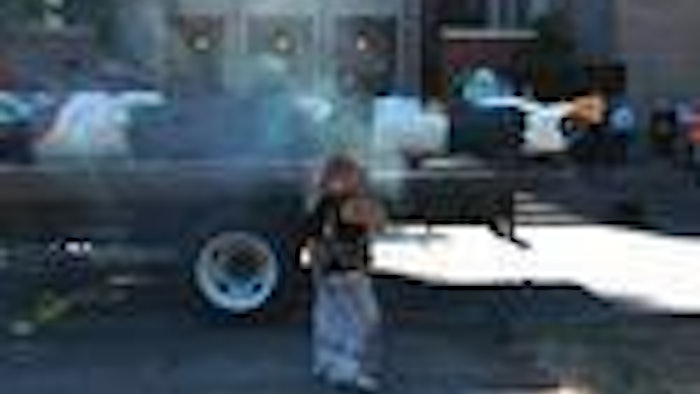 PORTLAND, Ore. (AP) — A Pacific Northwest tribe is traveling nearly 5,000 miles across Canada and the United States with a 22-foot-tall totem pole on a flatbed truck in a symbolic journey meant to galvanize opposition to fossil fuel infrastructure projects they believe will imperil native lands.

This is the fourth year the Lummi Nation in northwest Washington has embarked on a "totem journey" to try to create a unified front among tribes across North America that are individually fighting plans for coal terminals and crude oil pipelines in their backyards.

The highly visible tours, which include tribal blessing ceremonies at each stop, fit into a trend of Native American tribes bringing their environmental activism to the masses as they see firsthand the effects of climate change, said Robin Saha, a University of Montana associate professor who specializes in tribal issues and environmental justice.

"I wouldn't go as far as to say there's an anti-development movement, but tribes are feeling the effects of climate change quite dramatically and are responding in a lot of different ways," Saha said. "Some of them feel as if they're not going to survive."

In North Dakota, for example, people from across the country and members of 60 tribes have gained international attention after gathering in opposition to the four-state Dakota Access oil pipeline. The totem pole heads to that site, near the Standing Rock Sioux's reservation, next week.

Tribes in the Pacific Northwest have engaged in public protests and taken legal action as West Coast ports have emerged as strategic locations for crude oil and coal companies to reach customers in energy-hungry Asia. Seven crude oil or coal export terminals are proposed for conversion, expansion or construction on the Oregon and Washington coast. Some have already led to increased freight train traffic along the scenic Columbia River Gorge, where local tribes fish salmon.

A coalition of tribes turned out in June after an oil train derailed in Mosier. The oil from the derailment mostly burned off in a huge fire, but a small amount entered the Columbia River where the tribes have federally guaranteed fishing rights.

"We're all trying to unite our voices to make sure we're all speaking out," said Jewell James, a Lummi tribal member and head carver at the House of Tears Carvers.

In recent years, cheap natural gas has prompted many domestic utilities to abandon coal, driving down production at major mines in the Powder River Basin of Montana and Wyoming, the nation's largest coal producing region. Asian coal markets have become a potential lifeline for the mining industry — and Pacific Northwest ports are seen as the anchor.

The Lummi Nation launched a savvy public relations campaign last year against what would have been the nation's largest coal export terminal proposed for Cherry Point, Washington, at the heart of their ancestral homeland.

In May, the U.S. Army Corps of Engineers denied a needed permit for the Gateway Pacific terminal after finding it would damage tribal fishing rights.

This year's 19-day totem trek started Tuesday in Vancouver, British Columbia, and makes a stop Friday in Longview, Washington, where a similar shipping terminal would export 44 million tons of coal annually to Asian markets. With the Gateway Pacific project on ice, the Longview project would now be the nation's largest coal export terminal.

It would mean 16 coal trains a day, mostly from mines in Montana and Wyoming, and an additional 1,600 round-trip vessel calls a year in the lower Columbia River, said Jasmine Zimmer-Stucky, senior organizer with the Columbia Riverkeeper. There are concerns that wake from the ships could strand juvenile salmon and impact tribal fishing, she said.

Bill Chapman, president and CEO of Millennium Bulk Terminals in Longview, said in an emailed response to questions that a draft environmental review by Washington state and county officials found there would be no impacts to tribal fishing. Trains already run through the area on established tracks and have caused no issues, he added.

The terminal on the site of an old aluminum smelter plant would create hundreds of much-needed family wage jobs and is supported by labor unions, Chapman said.

"We're building on a location where industry has existed for over 70 years," he wrote. "Our export terminal is sited on a stretch of the Columbia River dotted with manufacturing plants and docks."

A third large coal terminal in Oregon was dealt a blow this month when a judge upheld the state's right to deny the project based on a similar threat to tribal fishing rights.

If proponents decide to appeal, the case will go to trial in November.

This year's brightly painted totem weighs 3,000 pounds and is carved of western red cedar. An eagle with a 12-foot wingspan sits on top, and the pole itself features a wolf and bear — symbols of leadership, cunning and courage — as well as white buffalo and tribal figures, said James, who has been carving totem poles for 44 years.

To the sounds of drums and a prayer song, the 22-foot-tall totem pole was blessed in a smudge ceremony at the entrance of Saint Mark's Episcopal Cathedral in Seattle Thursday. Lummi Nation member Linda Soriano fanned smoke from burning sage, covering the pole in a haze as sun rays beamed down. She then fanned the smoke through the crowd gathered outside the church.

"Mother Earth is hurting," said Lummi Nation member Randy Peters Sr. as he began his prayer song, "Mother Earth has been hurting from all of the abuse that has been going on. The unsafe practices of the coal, and the mining and the transportation of energy."

Tribes in Oregon, Montana, Idaho, North Dakota, South Dakota and Canada will host the Lummi until their end point in Winnipeg, Manitoba, where tribes are fighting oil pipelines bound for the East Coast.

"You can't put a price on the sacred. Our land and our water are sacred," said Reuben George, manager of the Tsleil-Waututh Nation Sacred Trust Initiative in Vancouver, British Columbia, where his tribe is opposed to a major oil pipeline. "This totem pole represents our laws, our culture and our spirituality."