BEIRUT (AP) — The Russian military sent long-range bombers to strike a series of Islamic State targets in the group's de facto capital of Raqqa on Thursday — a fresh round of airstrikes that Syrian activists said killed at least 20 civilians and came amid Turkish calls for greater cooperation with... 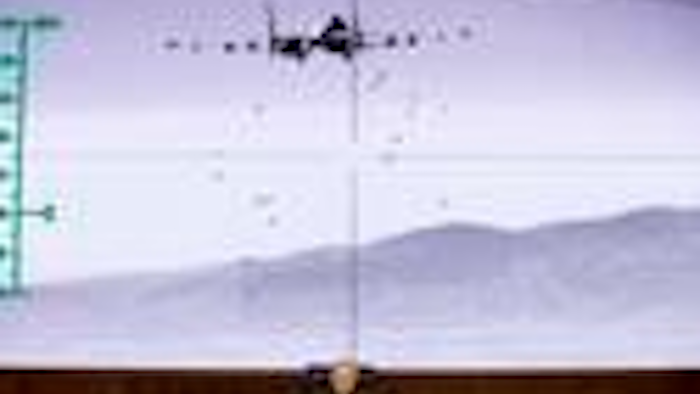 BEIRUT (AP) — The Russian military sent long-range bombers to strike a series of Islamic State targets in the group's de facto capital of Raqqa on Thursday — a fresh round of airstrikes that Syrian activists said killed at least 20 civilians and came amid Turkish calls for greater cooperation with Moscow against the extremist group.

The offer by Turkish Foreign Minister Mevlut Cavusoglu to coordinate with Russia on operations against IS followed a meeting between the Russian and Turkish leaders earlier this week in which they agreed to mend ties.

Relations between the two nations, which back opposite sides in Syria's civil war, soured after Turkish air force jets downed a Russian warplane on the Syrian border in November. Russia retaliated by deploying long-range air defense missile systems to its base in Syria, 50 kilometers (30 miles) south of the border with Turkey and imposing an array of economic sanctions.

Cavusoglu also said Turkey would resume airstrikes against IS targets in Syria, months after they were suspended amid the row with Moscow. "On the issue of Daesh, we have made a call to Russia. We said we have a common enemy which we can struggle against together," Cavusoglu said, using an Arabic-language acronym for IS.

"Turkey is a very important partner, and we can only welcome what Cavusoglu has said," Bogdanov said, according to the Tass news agency. "It's a result of contacts on the highest level ... with our Turkish partners. It's a very important statement."

The early morning airstrikes on the IS stronghold of Raqqa in northern Syria sent waves of thick, gray smoke wafting over the city's skyline.

A local activist group, Raqqa is Being Slaughtered Silently, said at least 20 civilians were killed in the assault, which struck an oil refinery and cut the city's water supply. The Britain-based Syrian Observatory for Human Rights said 24 civilians were killed, along with six others whose affiliation or identities were not immediately confirmed.

Both groups said the strikes were launched by Russian jets, though it was not clear how they made the determination. The Russian military said six of its long-range bombers had flown from their base in Russia to strike IS facilities near Raqqa, but did not mention civilian casualties. It said the raid destroyed a large ammunition depot, a plant producing chemical weapons and a large IS training camp.

Meanwhile, there was no letup in the embattled northern Syrian city of Aleppo, where Turkey and Russia are supporting opposing sides in the conflict and where residents and activists reported a chlorine gas attack late Wednesday.

A Syrian rescue worker and opposition activists said Thursday that the Syrian government airstrike on an opposition-held district in the embattled city killed at least two people. The attack on the city's eastern Zabadieh neighborhood saw at least four barrel bombs dropped on the area, one of which purportedly released the chlorine gas.

Abdelkafi al-Hamdu, a resident of Aleppo, recounted dramatic moments of gasping for breath and cowering with his family on the top floors of their apartment building as a choking gas filled the hallway.

Al-Hamdu said he saw two airstrikes from his in-law's balcony, about 30 meters (yards) away, the first of which released a gas he identified by the smell as chlorine.

He took cover in the apartment but began experiencing severe difficulty breathing, so he took his wife and daughter with him and tried to leave the building. But the odor grew stronger as they descended the stairs, so they returned to the higher floors to wait out the effects, he said, speaking to The Associated Press via a messaging service.

A Syrian military official denied the allegations, saying they were fabricated by the militants. The official, based in Damascus, spoke on the condition of anonymity because he was not authorized to give official statements.

The Organization for the Prohibition of Chemical Weapons said Thursday the reports of possible chemical weapons use in Syria were "of great concern."

Accusations involving use of chlorine and other poisonous gases are not uncommon in Syria's civil war, and both sides have denied using them while blaming the other for using them as a weapon of war. Last week, the Syrian government and the opposition traded accusations of using chlorine, also in Aleppo.

The accusations came hours after the Russian military, which is fighting alongside Syrian government forces in the civil war, promised a daily, three-hour cease-fire for Aleppo to allow humanitarian aid into besieged areas. Lt. Gen. Sergei Rudskoi of the Russian military's General Staff said the cease-fire would be observed from 10 a.m. to 1 p.m. local time starting Thursday, in order to facilitate the distribution of aid.

However, residents of the opposition-held eastern part of the city reported near-constant fighter jet overflights on Thursday.

"I'm at home and I don't dare to leave — the jets are not letting up," resident Wissam Zarqa told The Associated Press by telephone.

A senior U.N. humanitarian official, Jan Egeland, said the Russian offer of a daily three-hour truce "is really nothing. We need 48 hours." Speaking in Geneva, he said that Russia has agreed to hold talks with U.N. officials to hammer out a "workable" plan for a humanitarian pause in the fighting in Aleppo.