Colorado town takes a breather a year after huge mine spill

DENVER (AP) — A year after a mine waste spill turned their river a weird yellow-orange, residents of a Colorado mountain town are taking a break from the aftermath for a party that includes a specially brewed beer the color of the spill. They're also taking a few jabs at the federal Environmental... 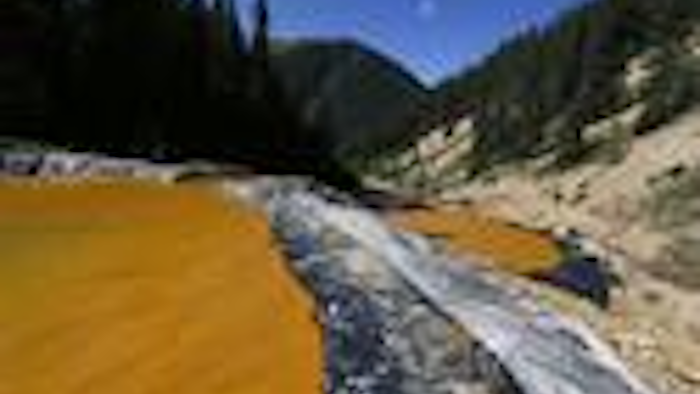 DENVER (AP) — A year after a mine waste spill turned their river a weird yellow-orange, residents of a Colorado mountain town are taking a break from the aftermath for a party that includes a specially brewed beer the color of the spill.

They're also taking a few jabs at the federal Environmental Protection Agency, which accidentally caused the 3-million-gallon spill at the Gold King Mine on Aug. 5, 2015.

Silverton is staging "Super FunDays" this weekend, a play on the Superfund cleanup expected to get underway in the distant future.

The blowout sent wastewater containing arsenic, lead and other heavy metals into the Animas River near Silverton, and the pollution reached rivers in New Mexico and Utah.

Political and legal battles are still playing out, and the EPA is moving slowly and deliberately toward launching a massive Superfund cleanup.

Here's where things stand in the aftermath of the spill:

Bars and restaurants are serving up "EPA Fungi" ravioli, "Orange Creek-sicle" fruit smoothies and other specials for Super FunDays.

"It's unclarified, so it looks kind of muddy, and we added a tiny bit of blood orange," brewery co-owner Molly Barela said.

A fun run and community party are also planned.

Asked about the jovial tone, town spokeswoman Blair Runion said Silverton went through a long and serious debate before endorsing a Superfund cleanup.

"We need to turn it into something positive that we can embrace," she said.

The EPA declined to comment, but it will have an information booth at the party Saturday.

HOW THE SPILL HAPPENED

An EPA-led crew was doing preliminary cleanup work at the Gold King when the blowout occurred. The agency estimates 880,000 pounds of metals poured into the Animas.

Water utilities shut down their intake valves and farmers stopped drawing from the rivers. The EPA says the water quality quickly returned to pre-spill levels.

Construction crews returned to the Gold King in July to stabilize the opening with steel and concrete. The work is designed to keep the entrance from collapsing and make sure it's safe to enter during future cleanup efforts.

A temporary treatment plant is cleaning wastewater still flowing from the mine.

The EPA could formally launch a Superfund cleanup as early as this fall encompassing the Gold King and 47 other nearby mining sites. The first steps would be extensive reviews and planning. No timeline or cost estimates have been released.

An investigation last year by the Interior Department, which is independent of the EPA, said the cleanup crew could have avoided the spill but rushed its work. Interior officials said they found no evidence of criminal wrongdoing.

The EPA said this week a separate criminal investigation is still underway, along with an internal inquiry.

New Mexico sued both the EPA and Colorado over the spill.

Congress has conducted multiple hearings on the spill and is considering several bills to address hundreds of old, leaking mines nationwide.